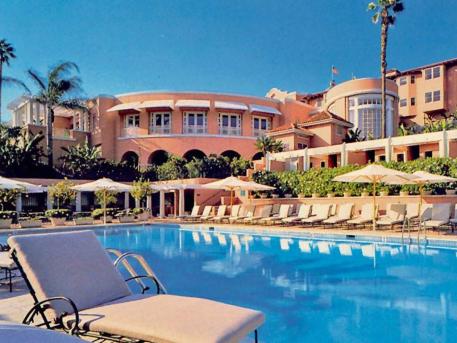 BEVERLY HILLS, CA. June 1, 2012 — The Beverly Hills Hotel has been named the first Historic Landmark for the City of Beverly Hills, as recently announced by the Southern California city’s Cultural Heritage Commission.

Celebrating its 100th anniversary this year, The Beverly Hills Hotel opened in 1912 prior to the founding of Beverly Hills itself, and the city grew up around the glamorous hotel. To this day, the iconic property remains at the heart of the star-studded Beverly Hills community, and it is devoting all of 2012 to the 100th anniversary celebration of its heritage not only as a newly-announced landmark and second home to Hollywood royalty, but also as a hospitality standard-bearer for future generations.

“We are truly grateful to the City of Beverly Hills for this Historic Landmark honor,” said Christopher Cowdray, chief executive officer of Dorchester Collection. “We have always been inspired by the magic and beauty of our Beverly Hills location, and it has helped provide The Beverly Hills Hotel with an iconic backdrop. As we celebrate our 100th anniversary this year, we look forward to highlighting this new Historic Landmark designation with great pride and joy.”

The hotel’s award as the city’s first Historic Landmark will be celebrated on September 12, 2012 in a special gathering for the Beverly Hills community. The event will include the opening of a historic time capsule, placed at the property’s front red-carpet entrance in 1993 when the hotel closed for a two and a half year refurbishment. The capsule’s location is marked by a gold plaque which indicates it is to be opened during the hotel’s centennial year. While its contents are reportedly ‘unknown,’ artifacts including a cigar from frequent guest Milton Berle and hand-drawings from a frequent celebrity guest are rumored to be inside. A new time capsule will also be planted, and the city mayor’s office will issue a proclamation declaring the ceremonious day the official “Beverly Hills Hotel Day.” Other 100th anniversary activities for The Beverly Hills Hotel include ongoing dining, spa and anniversary package offerings. An added highlight of the year-long anniversary celebration is the book launch of The Beverly Hills Hotel – The First 100 Years, by Beverly Hills resident Robbie Anderson, great-grandson of the property’s original owner and official historian for the hotel.

“Our new Historic Landmark status inspires us to continue to raise the bar when it comes to service and hospitality leadership,” said Edward A. Mady, regional director, West Coast, USA and general manager. “The Beverly Hills Hotel philosophy of ‘We Care’ is designed to provide not only a historically outstanding travel experience for our guests, but also to present a wonderful work environment for our employees and a welcoming local haven for our neighbors. We will ever be proud to call Beverly Hills home, and we thank the Cultural Heritage Commission for this wonderful recognition.”