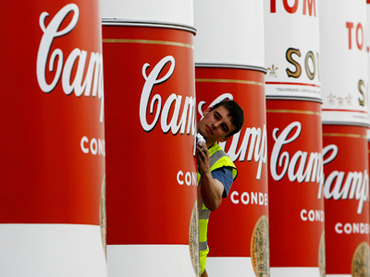 Tomato soup was Andy Warhol’s favorite dish. Now the world’s biggest soup maker Campbell’s is to launch special-edition cans of its speciality featuring the artist’s famous quote “In the future everybody will be famous for 15 minutes.”

Bearing labels reminiscent of the pop artist’s iconic paintings, the 1.2 million cans will come in four color schemes. Each will cost 75 cents and be available at Target stores in the United States.

The latest promotion is reportedly part of Campbell’s effort to boost sales after years of declining business.

Campbell’s once commissioned the leading light of American pop art, Warhol, to do a painting of a soup can as a gift for its retiring board chairman.

The flamboyant artist was paid $2,000 for the job. There was no contact with him until 1985, when the company commissioned the 57-year-old artist to paint packages of its new dry soup mixes for advertisements.

Six years after the artist’s death the company bought a Warhol painting of one of its tomato soup cans to hang in its boardroom of its headquarters.