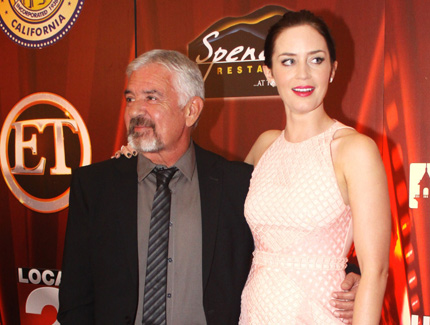 Although the Palm Springs International Film Festival is one of the largest International film festivals in the world, this 23rd annual film festival chose “Salmon Fishing in the Yemen”, an English language movie to begin its eleven-day marathon of screening films at its five venues in Palm Springs.  Well, if one considers the thick Scottish burghs of some of the characters in the film, perhaps, it does qualify as a foreign film.  Several audience members I spoke with later, however, said they had a little problem in understanding some of the more witty and satiric idiomatic expressions, as well as some of the dialogue of the actors.

There is, however, no misunderstanding when it comes to Emily Blunt, the beautiful, tall, willowy English actress.  She not only starred in the film, she attended the screening on Thursday, January 5, at the Palm Springs High School auditorium where the film was shown for 1200 assembled movie fanatics. It must be that cultured Brit accent that just sends Americans into a state of awe when it comes to their acting.  Blunt made a huge cinema impact in “The Devil Wears Prada” playing the private secretary to Meryl Streep, only a couple of years ago.  Now she stars in the romantic comedy directed by high profile director Lasse Hallstrom (“Cider House Rules”, which produced an Oscar for Michael Caine and an Oscar nomination for Juliet Binoche in “Chocolat”).

The wonderful Kristin Scott Thomas, in a departure from her usual dramatic roles, plays the Prime Minister’s PR consultant, whose assignment is to see it that McGregor and Blunt succeed, despite their disagreements.  Scott is a delight in a juicy supporting role reminiscent of Carole Lombard and the screwball comedies of Preston Sturges.

“Salmon Fishing in the Yemen”, is based on the satiric novel of the same name by Paul Torday.  However, director Hallstrom and his writers have opted for a different take with the movie.  They have injected more romance and less political metaphor into the story with the result being the film is now a light romantic comedy that may not challenge the intellect, but still delivers a pleasant evening at the movies.  Remember, love is always in the air in the rom-com genre.

The film is beautifully photographed but don’t look for any hidden agenda items or provocative political story points to discuss later with friends over late night coffee or drinks at your favorite watering hole.  There simply aren’t any.  Never-the-less, the screening of the movie is a coup of sorts for festival Chairman Harold Matzner and festival executive director Darryl Macdonald, who somehow talked CBS Films into allowing the movie to be shown at the Palm Springs International Film Festival (PSIFF) two months ahead of its theatrical release.   Well Done Gentlemen !

The festival is up and running from 9 am to 9 pm for the next ten days.  You have 188 movies and documentaries from seventy countries from which to choose.  Also, the festival will screen 40 of the 63 foreign films being considered for Oscar submission as Best Foreign Language Film of the Year.  Films are being shown at five Palm Springs theatres:  The Palm Springs Regal Cinemas Stadium Nine, The Camelot Theatres, The Annenberg Theatre, the Palm Canyon Theatre, and the 1200 seat Palm Springs High School auditorium.  It’s the biggest event that comes to town every year.