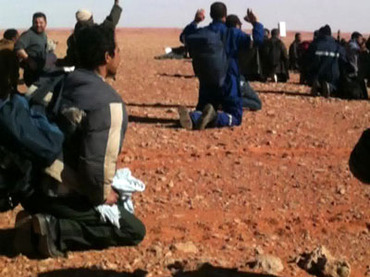 Twenty-five more bodies have been found at the gas complex in Algeria where a clearing up operation continues. It is unclear if all were hostages. Earlier it was reported there were a possible further 25 burned bodies of hostages found inside the plant.

It comes as Al-Qaeda linked commander Mokhtar Belmokhtar claimed responsibly for the deadly hostage drama at the gas plant.

Belmokhtar expressed readiness to negotiate with both Algerian and Western states, provided they cease their bombing campaign in Mali.

The news that more bodies were found at the plant came just hours after the Algerian Interior Ministry warned that the death toll of foreign and Algerian workers taken hostage during the siege may increase.

So far, Algerian authorities have not announced the nationalities of any of the 23 dead hostages. British, US, Norwegian and Japanese nationals have been reported missing.

Though the hostage crisis in eastern Algeria has ended, the scene at the plant remains chaotic as rescuers struggle to find those reported missing. For now, the fates of nearly 30 people from the UK, the US, Norway Japan and Malaysia remain unclear.

The UK Prime Minister confirmed Sunday that three British hostages had been killed, and that another three British nationals are also “believed dead.”

The UK Foreign Office has confirmed that some UK residents returned home overnight.

Shortly after Cameron’s statement, Foreign Secretary William Hague confirmed that 22 British citizens who survived that hostage drama had flown home on charter flights organized by the government or by oil company BP.

A Japanese engineering firm said Sunday that of the 17 Japanese nationals working at the plant, 10 are still missing and seven have been confirmed as safe.