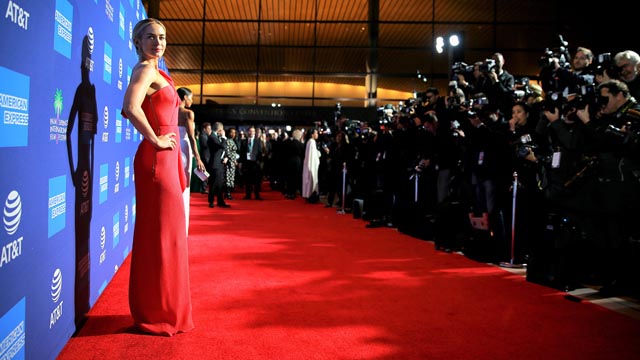 When it comes to prestigious film festivals it doesn’t get much more glamorous or star-accessible than the annual fabulous Palm Springs International Film Festival (PSIFF) held every January.

Ranked as one of the three most important and influential movie festivals in North America, PSIFF is a magnet in drawing not only cinema aficionados and loyal patrons from all over the country, it also has the power to host Hollywood stars, filmmakers, studio power-brokers of the American movie industry, as well as Internationally known actors, directors, producers and writers to this glittering annual event. The Red Carpet walk of stars and guests to the Gala begins at 5:30 PM where one can see their favorite stars arrive for the Banquet at 6:00 PM.

Harold Matzner, Chairman of the Board, once again delivers a highly anticipated 10 day, celebrity-filled festival.  The veritable “feast of films” – 180 plus – from over 81 countries opens on Thursday, January 2, with a black-tie Film Awards Gala and banquet held in the Palm Springs Convention Center where 2,500 dinner guests are anticipated to raise 2.5 million dollars to help support the Palm Springs International Film Society and Foundation and its activities, and help fund the 2021 Festival.

“Entertainment Tonight” Television Hostess Mary Hart, once again, will handle the Awards ceremony portion.  Honorees for the 2019/2020 Awards include: Martin Scorsese for “The Irishman”, who receives the Sonny Bono Visionary Award; Jennifer Lopez, receives the Spotlight Award for “Hustlers”; Antonio Banderas receives the International Star Award (Male) for “Pain and Glory”; Zack Gottsagen, the Rising Star Award for “The Peanut Butter Falcon”; Laura Dern, receives the Career Achievement Award for “Marriage Story”; Charlize Theron receives the International Star Award (female) for “Bombshell”; Renee Zellweger is awarded the Desert Palm Achievement Award for “Judy”; Joaquin Phoenix, the Chairman’s Award for  “Joker”; Cynthia Erivo, receives the Breakthrough Performance Award for her portrayal in the title role as Harriet Tubman, in “Harriet” and Adam Driver receives the Desert Palm Achievement Award (male) for his performance in  “Marriage Story.  All honorees are expected to be in attendance to pick up their trophies and walk the Red Carpet on January 2nd.  The above listed are the nominees at the time we went to press.  Check The Desert Sun newspaper for more recent additions.

According to Variety, the show business publication, Robert DeNiro, has been selected to receive Variety’s Creative Impact in Acting Award for his work in “The Irishman”. Director Todd Phillips, will receive the Creative Impact Award in Directing for his film “Joker,” at Variety’s annual festival luncheon at the Parker Palm Springs hotel on January 3rd.

I have been covering this festival since 1996. It’s come a long way since the late, former, Palm Springs Mayor Sony Bono had a dream of making his city a focal point for the motion picture industry by launching an annual film festival.  Thirty years later the fruits of a group of talented show business professionals and business people has become a success story second to none.

The festival team of gifted programmers is now headed by Festival Artistic Director Lily Rodriguez.  Each programmer is an expert in assessing the quality of films they view from all over the globe.  The festival films will be screened at six movie venues: Regal Palm Springs Nine, Camelot Theatres; Mary Pickford Theatre in Cathedral City, The Annenberg Theatre located downstairs in the Palm Springs Art Museum, The Palm Canyon Theatre, and the Richards Center for the Performing Arts at Palm Springs High School.

There are variety of ticket packages, Passes, and Badges to satisfy the more than 130,000 film fans that are expected to attend over the 10 days of the festival.   Hard core fans of English speaking and foreign films with sub-titles should please and satisfy even the fussiest of festival patrons.  For ticket information go online to www.psfilmfest.org or call 1-800-898-7256.

A few last tips to make your festival experience a winning one.  Remember, it’s January.  Yes, I know you’re in Palm Springs, but when the sun sets in the desert, temperatures can dip into the forties.  Bring a warm jacket and scarf, along with gloves, if you have them, to keep you warm while in the ticket queues waiting for your film to open the doors for the next screening.   You will be glad you did.    See you at the PSIFF 2020 festival.