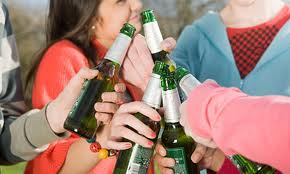 Morongo Basin – Between February 21 and June 6, 2012, deputies from the San Bernardino County Sheriff’s Department, assisted by Investigators from the California Department of Alcoholic Beverage Control (ABC), officers from the California Highway Patrol and representatives from several community groups conducted numerous operations throughout the Morongo Basin intended to reduce the availability of alcoholic beverages to minors.

During the grant cycle, eight enforcement events – including both shoulder tap and minor decoy operations – were conducted. One educational program, administered by ABC, was held at the Yucca Valley Community Center on May 10, 2012. During this program, ABC licensees were invited to attend training on legal issues related to alcoholic beverage sales, use of false identification, drug use and abuse and more. Approximately two dozen representatives of area licensees attended the free four hour training session.

During minor decoy operations, an underage decoy is sent into licensed premises and, under the supervision of a sworn law enforcement officer, attempts to purchase alcoholic beverages. Decoys are instructed to provide their true and show their true identification, if asked. Four separate minor decoy operations were held during this grant cycle. During the operations, decoys attempted to purchase alcoholic beverages 54 times. The decoys were successful on five separate occasions. In each of these cases, the clerk or employee was issued a citation for providing alcoholic beverages to a minor. Administrative cases against each of these five businesses were forward to ABC for possible action against the establishment’s liquor license.

These operations were funded and made possible by the California Department of Alcoholic Beverage Control through the department’s Grant Assistance Program (GAP). ABC is a department of the Business, Transportation and Housing Agency.