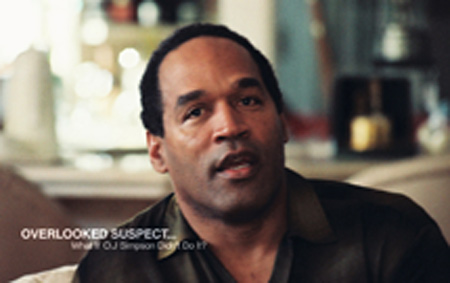 March 21, 2012, Palm Springs, CA –  On October 3rd, 1995 (with an estimated 150 million people watching on live television), the jury in the longest trial in California history declared O. J. Simpson not guilty of murdering his wife, Nicole Brown Simpson, and her friend Ronald Goldman.  Despite this, if you asked the question today, almost everyone would say that they believe Simpson committed the murders.

But what if everyone is wrong? What if someone else committed the murders of Nicole Brown Simpson and Ronald Goldman?

Overlooked Suspect, a new documentary that is being screened on Friday, March 30th during the American Documentary Film Festival, asks exactly that question. The film highlights a detailed and on-going 15 year investigation that has led one of America’s leading Private Investigators, William C. Dear, to suggest that perhaps O.J. Simpson did NOT commit those murders. What’s more, a team of internationally recognized experts in their respective fields, when presented with the evidence, has come to the same, independent conclusion.

“We have 16 distilled years and over 5,000 hours of intense research and investigation into a one-hour, thought-provoking, viewer-friendly documentary that will empower the public to decide what they feel, in conclusion, about the case, and whether or not there was a rush to judgment,”  says the film’s Director, David Nerman. “In the end, the audience will be the Judge.”

See Overlooked Suspect on Friday, March 30, 2012 at 10am!
OF NOTE: Producer Howard Barrett and Investigator William C. Dear will attend
the festival screening and be available for advance interviews.