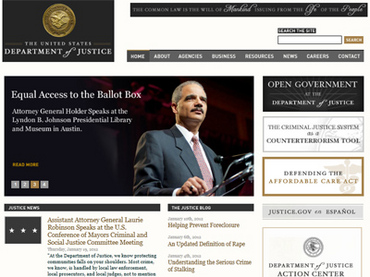 Hacktivists with the collective Anonymous are waging an attack on the website for the White House after successfully breaking the sites for the FBI, Department of Justice, Universal Music Group, RIAA and Motion Picture Association of America.

In response to today’s federal raid on the file sharing service Megaupload, hackers with the online collective Anonymous have broken the websites for the FBI, Department of Justice, Universal Music Group, RIAA, Motion Picture Association of America and Warner Music Group.

“It was in retaliation for Megaupload, as was the concurrent attack on Justice.org,” Anonymous operative Barrett Brown tells RT on Thursday afternoon.
Only hours before the DoJ and Universal sites went down, news broke that Megaupload, a massive file sharing site with a reported 50 million daily users, was taken down by federal agents. Four people linked to Megaupload were arrested in New Zealand and an international crackdown led agents to serving at least 20 search warrants across the globe.

The latest of sites to fall is FBI.gov, which finally broke at around 7:40 pm EST Thursday evening.

Less than an hour after the DoJ and Universal sites came down, the website for the RIAA, or Recording Industry Association of America, went offline as well. Shortly before 6 p.m EST, the government’s Copyright.gov site went down as well. Thirty minutes later came the site for BMI, or Broadcast Music, Inc, the licensing organization that represents some of the biggest names in music.

Read the whole article at RT.COM…