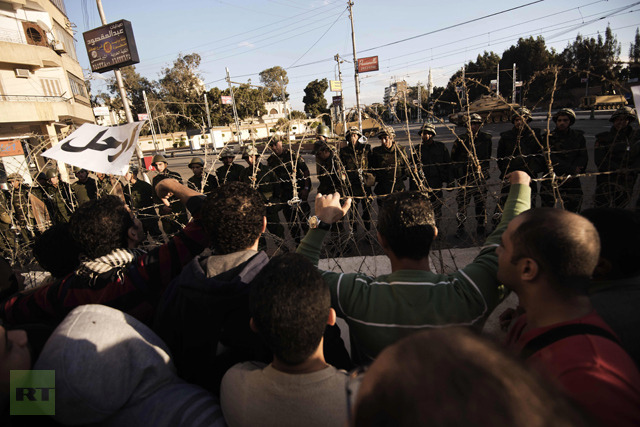 Several guards have been injured after protesters broke through barbed wire around the presidential palace in Cairo. Tens of thousands have come to the palace to slam Egyptian President Mohamed Morsi’s bid for absolute power.

Friday again saw thousands marching towards the presidential palace in Cairo, while hundreds others rallied in the iconic Tahrir Square. The demonstrations were called by opposition forces, which include various leftist, liberal and democratic groups.

“We want to see the fall of the regime,” chanted the crowd venting their anger with President Morsi, the drafted constitution and the Muslim Brotherhood.

The palace has grown surrounded with barbed wire fences and concrete blocks. Police, national guard troops and military are guarding the place, including the tanks brought in Thursday.

The protesters rallied peacefully for several hours, but as night fell some began attempting to remove the barbed wire.

RT’s reporter Bel Trew watched the crowd remove the barricades and flood the streets around the presidential palace. There, the demonstratots climbed onto army tanks waving flags and chanting slogans against President Mors. Others tried to get over the gate or remove the barbed wire.

Protesters told Trew that the Republican Guards “just stepped aside and let people pass.” The guards are currently standing next to their tanks and other posts, but not getting involved with the protest.

“At the moment the mood here is more jubilant than violent. People are dancing and singing, there’s a lot of drum beats and football chants,” Trew says, adding that the protesters are set to spend the night rallying right in front of the palace.