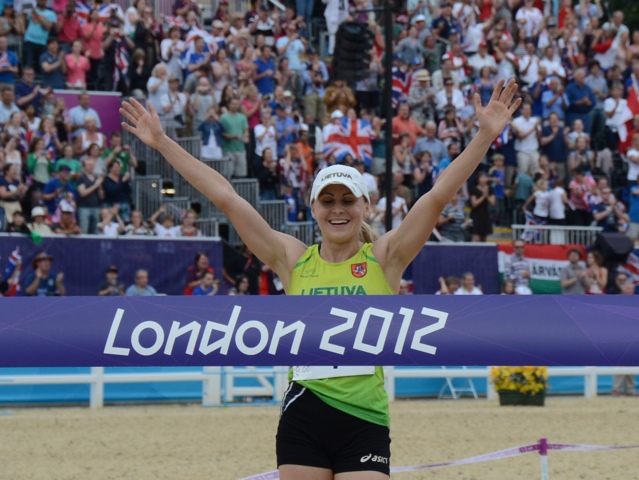 London, Great Britain: 12 August 2012 – Laura Asadauskaite (LTU) has blown away the field to win the Olympic Modern Pentathlon gold medal, the final one to be awarded at the London 2012 Olympic Games.
The Lithuanian won with a powerful performance in the combined running and shooting event, an innovation for modern pentathlon’s centenary Olympiad, along with the laser pistols used for the target shooting.

The 28-year-old world number one said: “I am enormously happy for this day. This is a once-in-a-lifetime opportunity and you can’t imagine what it feels like for me to have a gold medal. My husband Andrejus Zadneprovskis already has a silver & bronze, so I am happy to get one up on him!”

Brazil’s Yane Marques started the final event level with Asadauskaite and took an early lead but couldn’t stick with the fierce pace set by the Lithuanian on the hilly course at Greenwich Park. To the delight of the home crowd, she was overhauled by Britain’s Samantha Murray who took the silver medal, with Marques still thrilled to win bronze.

Murray started the combined event with an eight second handicap and at one point was down in seventh. But a nerveless performance on her second visit to the shooting range moved her up to third and after that her running was too strong for Marques.

A crowd of around 25,000 went absolutely wild as 22-year-old Murray crossed the finish lane in the centre of the stadium.

After receiving her silver medal from Olympic great Sergei Bubka, Murray said: “Olympic silver medalist. Wow! It’s surreal to be honest but it just shows what can be achieved if you put your mind to something.

“Every time I came into the stadium the crowd just surged me on and everyone shouting pushed me on. I did a really good last shoot and I could hear the crowd chanting every time I got a shot.”

Murray later stated: “I could have carried on running for another 10 minutes because I was loving it so much.”

She said she was inspired to get into the sport by the other British women who have won medals in every Olympic Games since women were admitted in 2000 and called the sport the ultimate test of an athlete.”

The top 11 athletes began the combined event within 30 seconds of each other, illustrating what a close contest this was. Defending Olympic champion, Lena Schoneborn of Germany, finished 15th after a poor ride in the show jumping left her too much to do in the final event.

Earlier Hungary’s Sarolta Kovacs had broken the Olympic record for the swimming event of the modern pentathlon. Her time for the 200 metre freestyle was 2:08:11.

UIPM Secretary General Joël Bouzou  said: “The combined was gladiatorial, something like James Bond would do. The drama at the end of the men’s event was fabulous with Svoboda changing places with Cao.”

“It creates uncertainty in the result for the fans with the rankings constantly changing through the event,” he said. “For me it’s really beautiful.

“The laser shooting is a great innovation for both the elite athletes and for the development of the sport, which must be a priority.”

The large crowds provided amazing support for all the athletes, drawing praise from UIPM President Dr h.c. Klaus Schormann: “The British know sport so well and showed great respect for the athletes. There were no British athletes on the podium on Saturday but most people stayed for the medal ceremony.”

For further information on the Modern Pentathlon event at London 2012, please visit Pentathlon.org/london2012