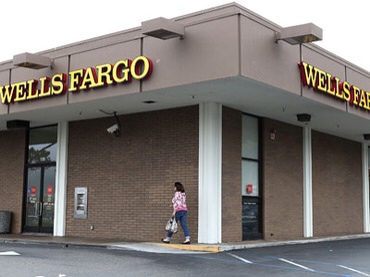 Wells Fargo employees wrongfully foreclosed a modest home near a small town in California, removing and destroying nearly all of an old couple’s belongings.

Alvin and Pat Tjosaas, who have been married for 56 years, lost three generations worth of their belongings when a contracted foreclosure crew accidentally broke into the wrong house. The Tjosaas had no mortgage on the house that Alvin had built with his dad as a teenager.

A 14-year-old Alvin had build the house brick by brick with his dad in 1961 and has taken his family and kids there ever since.

“I put my whole life into this place, building it for my mom and dad,” he told ABC News.

“I know every inch, every rock… my mom mixed all the cement by hand,” he told CBS.

Among the stolen goods were three tractor mowers, three golf carts, masonry tools, carpenter tools, a WWI uniform and flag, and decades worth of family heirlooms.

The property was the source of three generations of memories. The couple remembered letting their kids dig holes and catch lizards in the dirt outside.

“You can see this meant a lot to me,” Alvin said, with tears in his eyes.

While the costly mistake was at the fault of Wells Fargo, the bank only recently started responding to the incident after the media got ahold of the story.

Wells Fargo released a statement of apology for the losses suffered by the Tjosaas family and said they are moving quickly to “resolve this unfortunate situation in an attempt to right this wrong.”

The bank is offering the couple $260,000 for their losses, but the Tjosaas have not yet made a decision on whether or not to accept the money and move on.

The story of the Tjosaas is one of many in which bank subcontractors foreclose and destroy homes by accident. Currently there are more than 50 homeowner lawsuits that claim contractors break into and damage still-occupied homes. The foreclosures can have an emotional impact on its victims. California resident Norman Rousseau committed suicide last May after he was threatened with foreclosure. In July, Wells Fargo also threatened foreclosure on dying cancer patient Cindi Davis, who couldn’t make her $873 mortgage payments.

While foreclosure looms above the heads of those unable to make their payments, unlucky Americans like the Tjosaas family still sometimes find themselves a victim of the bank’s break-ins – regardless of whether or not they’ve paid off their house.