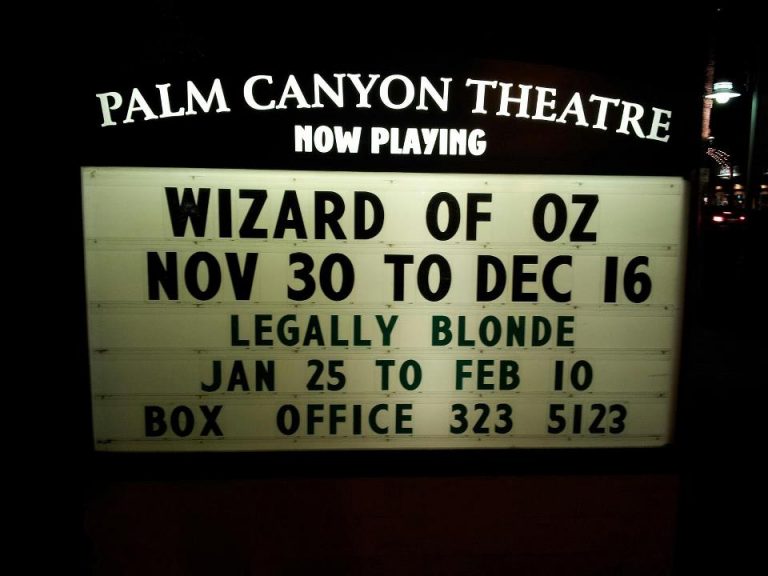 There truly is no place like home.  Just ask Dorothy Gale from Kansas.  She really knows, and so does her doggie Toto.  She will tell you in person – from the stage of the Palm Canyon Theatre in Palm Springs – but there is a catch. You have to attend a theatre performance to one of the world’s most beloved stories, in order to learn more.

For those people who have been living on another planet for most of the last century, the classic L. Frank Baum story was made into an iconic motion picture starring Judy Garland and a host of movie stars, back in 1939, during Hollywood’s golden years. The movie is a perennial Holiday TV favorite to this day.

The Palm Canyon Theatre, Palm Springs’ Flagship theatre, now brings a splendid theatrical version to its stage with sparkle, verve, and imagination, all under the steady direction of David McLaughlin, and the technical wizardry of J.W. Layne.

For performers of musicals, it doesn’t get much better than the music of Harold Arlen and the lyrics of E.Y. Harburg in order for the singers and actors to shine, and for the audience to tear up.  And thanks to new stage version book by John Kane, that’s exactly what takes place on stage.

This wonderful holiday show stars Chloe Marcotte as Dorothy.  Marcotte is a lovely soprano who will melt your heart with her rendition of “Over the Rainbow”.  And just like Judy Garland, she is an accomplished actor in the bargain.  Her Maria portrayal in “Westside Story” (opposite Anthony Nannini as Tony) last season was most memorable.  She is reunited with Anthony Nannini, once again, in “Oz”, who plays the Scarecrow.   Also, Nannini is the production’s clever and talented choreographer, who fashions the dance numbers for the entire cast – seven in the adult ensemble and the more than thirty children in the Munchkin Land numbers. He’s a real triple threat performer (with a lot of patience).

The additional principal performers who score in delivering solid performances are: Nikki Hock as Aunt Em’ and as Glinda, the good Witch of the North.  If one closes their eyes, one would believe that actress Billie Burke (the original Glinda in the 1939 movie) was indeed singing and acting up on the Palm Canyon stage.  The same feeling can be said of Luke Rainey as the Tin Man, and Erik Bradley (what energy) as the Cowardly Lion, both channeling their movie character actors (Jack Haley and Bert Larh, respectively).

Peter Mins as Professor Marvel and the Great Oz provides the right amount of bluster and faux wisdom in a role he was born to play.  Morgana Corelli is Miss Gultch and the Wicked Witch of the West.  In her stage makeup and boasting a cackle that could shatter glass, she both thrilled and scared a few of the youngsters in the audience in a spot-on performance.

Speaking of the youngsters in the show, the Munchkin kids – ranging in ages from five to 15 – acquitted themselves with honor and distinction.  They all were totally into their various characters with pro-like dedication in following the director’s instructions (I’m sure many parents thought now why don’t they do that at home when I tell them something?).   Ah, the theatre, it’s one of life’s great mysteries.

Although the book is new, the show remains faithful to the movie version.  The special effects seen in the movie are very effectively recreated on the stage by the creative team under the direction of McLaughlin, and resident Scenic Designer J.W. Layne.

I mentioned earlier that this production sparkled with imagination.  In great part it does because of the many vivid costume colors and designs of Se Layne.  The program notes credit six costume assistants.  I’m surprised that it only takes six to accomplish what this crew puts forth every performance.  I am very familiar with the Palm Canyon Theatre’s backstage area.  It’s a miracle that all of the sets and special effects come off as well as they do, considering the limited space with which the crew has to function.  Kudos also, to sound and lighting designer Stuart A. Fable for a tough assignment he makes looks easy.

“The Wizard of Oz” is a delightful Holiday show, which audiences of all ages will enjoy and appreciate.  The production runs through December 16th.  Tickets and reservations may be obtained by calling 760-323-5123.