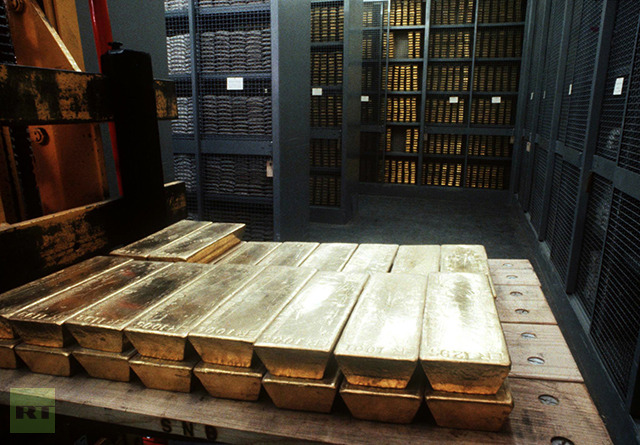 Germany is repatriating its gold reserves from the New York Federal Reserve. This decision has created a frenzy in the gold market. But that is just the tip of the iceberg.

According to the NY Fed, there are (2012) approximately 530,000 gold bars, with a combined weight of circa 6,700 metric tonnes stashed away in the Fed’s Lower Manhattan vaults.

These are official figures which are impossible to verify.

The gold is stored in the fifth sub-floor of the New York Fed building on Liberty Street. The vaults on the bedrock of Manhattan Island are located 80 feet below street level.

At today’s market value of approximately US$1700 dollars a troy ounce, the New York Fed has within its vaults a multi-billion dollar treasure trove.

Each metric tonne of gold is worth approximately $55 million.

The total value of the New York Federal Reserve’s gold bullion trove of 6700 tonnes is a staggering $368.5 billion.

But according to the New York Federal Reserve: “We do not own the gold. We are mere custodians.”

The gold is in “safe-keeping” on behalf of more than 60 sovereign countries and a few organizations. Close to 98 per cent of the gold bullion stored in the NY Fed’s lower Manhattan vaults, according to the Fed, belongs to central banks of foreign countries.

The remaining 2 per cent “is owned by the United States and international organizations such as the IMF.”

Germany’s central bank owns a total of 3400 tonnes of gold. According to recent reports, a staggering 69 per cent of its gold bullion bars (namely 2346 tonnes) are held in custody at the New York Federal Reserve, the Bank of England and the Banque de France.

The NY Federal Reserve Bank holds in custody 1536 metric tonnes of gold owned by the Bundesbank of the Federal Republic of Germany, 22.9 per cent of its total gold holdings in custody (6700 tonnes).

The Bundesbank has announced that it will repatriate “all of its 374 metric tonnes stored at the Banque de France (11 per cent of its total reserves), and 300 metric tonnes held in the vault of the New York Fed, reducing its share in the US from 45 per cent to 37 per cent.” .