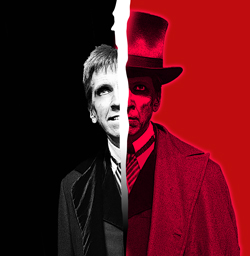 One of the many benefits that live theatre enjoys here in the desert is the on-going relationship between the McCallum Theatre and College of the Desert’s (COD) theatre arts department.  Where else can one produce a first-rate musical production, which includes the theatre’s professional staff and equipment inside a magnificent 1100 seat auditorium?   For both the actors and the audience alike, it’s a “win-win” situation.

“Jekyll & Hyde”, the operetta-like musical by Frank Wildhorn and Leslie Bricusse,  based on the story by Robert Louis Stevenson, is impeccably directed and choreographed  by Sha Newman, with rigorous musical direction under the baton of Dr. Darlene Romano.  The decision to do “Jeykll & Hyde” was an inspired selection by the college as their 2012 May production.  The show has big ambitions.  It is loaded with showy parts for the twenty-one actors and demanding vocal ranges for the actor/singers.   And everyone in this company of performers, technical, and backstage people delivered the goods to standing ovations at every performance.  Who could ask for anything more?

Mark Almy, long-time desert favorite, with a magnificent Baritone, portrays the dual roles of Dr. Henry Jekyll and the evil-possessed Mr. Edward Hyde with flair and gusto.  Almy’s background as a former professional opera singer and teacher ups the ante when it comes to performing Wildhorn’s soaring, aria-like songs and musical numbers.  He is riveting to watch on stage, and his work ethic as a performer is legendary in the desert.

One of the valley’s most talented actor/singers is the lovely Kaley Smith who plays Lucie, a young woman of the night, who is befriended by Jekyll at a time when both need to be better understood and accepted by their friends.  Smith is the possessor of a marvelous Soprano that soars in her solos and blends perfectly with Almy in their duets.  Together they light up the stage.

Natalie Gilbert as Emma, Jekyll’s fiancé embodies all of the qualities one would want in a mate. She is young, beautiful, and she has a lovely, seasoned and lilting Soprano voice that can turn a block of steel into butter, if required (I don’t see how Henry could resist her company).

Offering solid support in this high-concept musical are Frank Haggard as Henry’s friend John Utterson, and Tim Bruneau as Sir Danvers Carew, Emma’s father.  Raul Valenzuela as Simon Stride delivers a nicely nuanced performance as a would-be suitor to Emma.  It’s always a treat to watch Lou Galvan perform on the stage.  His dual role as  Archibald Proops, and as Spider, the proprietor of the Red Rat Club and Tavern are delivered with his usual professionalism.

Enough cannot be said about the vision of director Newman, and musical director Romano.  Their production has the scope and breadth of almost any show you will see on Broadway.  The McCallum and the College of the Desert partnership can take pride in this  “Jekyll & Hyde” production.

Also, a special thank you goes to part-time desert resident Barry Manilow whose generous gift arranged for, in part, for students from the Valley to attend performances of “Jekyll & Hyde”.