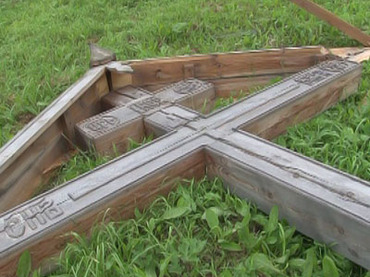 Four Orthodox Christian crosses have been chopped down in different parts of Russia. The incidents come after the Femen movement attacked a cross in Kiev to protest the sentence of the punk band Pussy Riot, who received two years in prison.

Three crosses have been taken down in the Urals’ Chelyabinsk Region, and one in the Archangelsk Region, northern Russia.

By the time police arrived at the scenes the vandals had already left. Authorities have launched an investigation into both cases.

The Arkhangelsk cross was erected in the memory of the victims of political repressions, said a local priest, Hegumen Feodosy.

He also said that in recent years the monastery, situated across the street from the cross, has seen two arson attacks and a number of other acts of vandalism.

“This comes in the context of all these incidents in recent months across the country, all this anti-church hysteria waged against our diocese, against the church authority, against everything sacred,”Hegumen Feodosy said.