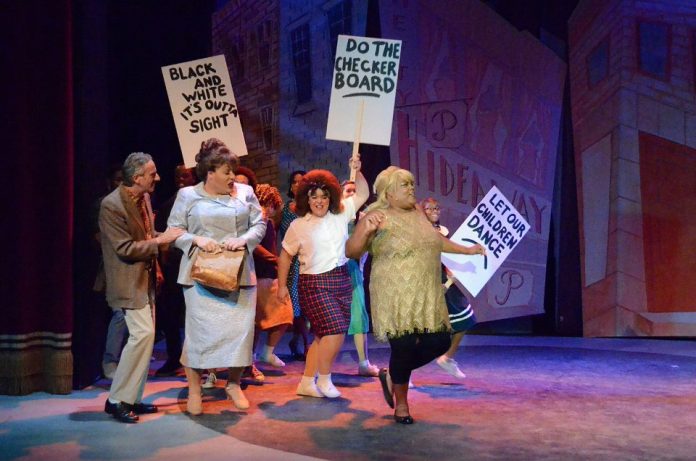 “Hairspray” the musical now playing at the Palm Canyon Theatre in Palm Springs, opened with a burst of energy on January 27th.  The cult-like musical (at least

as much of a cult-like musical as “The Rocky Horror Show”) had its fan base out in full force.  They whooped and yelled as each character and actor made his or her entrance, much to the delight of the “sold out” opening night audience.  Also, it was good to see the Palm Canyon Theatre, once again, have a full house for their opening night show.

The Tony-winning show, based on the movie of the same name (that starred John Travolta), has music by Marc Shaiman, lyrics by Scott Wittman and Shaiman, and a book by Mark O’Donnell and Thomas Meehan.  The production is wonderfully directed by Dane Whitlock, and is athletically and cleverly choreographed and staged by Anthony Nannini

With twenty-seven performers in the company, it’s not possible to list all of the highly motivated and energetic cast members.  However, the performers charged with the responsibility and the heavy lifting, do need to be recognized.  Stephanie Garrobo stars as  plump teenager Tracy Turnblad, who dreams of becoming a member of the cast of a Baltimore TV show (think Dick Clark’s “American Bandstand”) in the 1960’s.  Garrobo is a bundle of energy and joy, with a terrific singing voice.  Brian Scott aka “Jersey Shore” portrays Tracy’s Mom, Edna Turnblad, with panache and a twinkle in her eye.  Everyone should be so lucky as to have a Mom as played by Scott.

The principals in this light and fluffy tale of teenage dreams put sparkle and pizzazz into their performances, plus a sense of what 1960’s Baltimore was like for celebrity-obsessed teenagers.  Apparently, we haven’t progressed very far in 50 years.  Teenagers and their parents are still mesmerized by TV and movie celebrities.

Thanks to Bobbie Eakes (the mother from Hell), Diva Denise Carter (what a powerful voice and a spectacular performance), Chloe Marcotte (as Penny, Tracy’s best friend, is bubbly and cute), Ben Reece (a smooth Dick Clark-like performance), Sandy Reed (love interest to Tracy), Allegra Angelo (Tracy’s irritating competitor for a spot on the show), Terry Huber (Tracy’s very modern and up to date Dad, who dances sings, and does comedy exceedingly well), and Vertarias Hankins (beau to Penny, and a heck of a dancer), the up-beat, high-octane musical zips along at breakneck speed courtesy of director Whitlock.

“Hairspray” gives its many performers the opportunity to strut their stuff, and thanks to a nice set and lighting design by resident Scenic Designer J.W. Layne, and snappy musical tracks selected by David McLaughlin and musical direction by Charlie Creasy, plus costume designs by Se Layne, and the clever choreography of Anthony Nannini, the cast and crew provide the Palm Canyon Theatre with a most entertaining production that the whole family can enjoy.