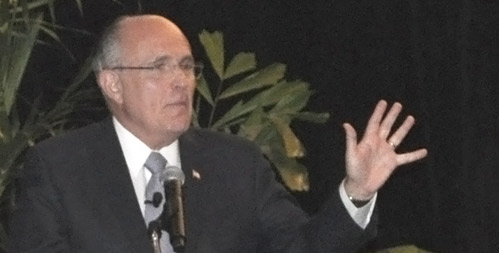 Nearly 500 people attended the event as the 2008 Presidential Candidate helped honor several community members for their contributions in our area. Lisa Houston, president and CEO of FIND Food Bank, Aurora Wilson, director of community resources at the Coachella Valley Association of Governments (CVAG), and Jennifer Johnson, a 2009 graduate of Desert Christian Academy and now on the LPGA tour, were recognized as hometown heroes. Each of the recipients was presented with a $2,000 gift toward their chosen organization: FIND Food Bank, Roy’s Resource Center and the Wounded Warrior Project, respectfully. Johnson is an advocate for the Wounded Warrior Project, which assists injured servicemen and women.

“You are producing people who give back,” Mayor Giuliani remarked about the faith-based school during his keynote address. “The real way to measure heroism is how much you give back.”

“It was truly a one-of-a-kind experience to unite our elected heroes and community servants who dedicate so much of their lives for the betterment of others,” said Dave Fulton, Desert Christian Academy’s founder and head of school. The auction was preceded by a VIP reception for elected officials to meet Mayor Giuliani.

Doctors and teachers in the audience were also thanked for their public service. Desert Christian Academy acknowledged several local teachers representing all three public school districts in the Coachella Valley as well as their own fantastic faculty and staff.

Desert Christian Academy’s Tuition Assistance Program allows students from all economic backgrounds the opportunity to attend the Faith-based, Christ-centered institution that builds exceptional students of great character. Desert Christian Academy, located in Bermuda Dunes, California, is home to nearly 500 students from toddlers to 12th grade, and is the leading college preparatory school in the Coachella Valley.