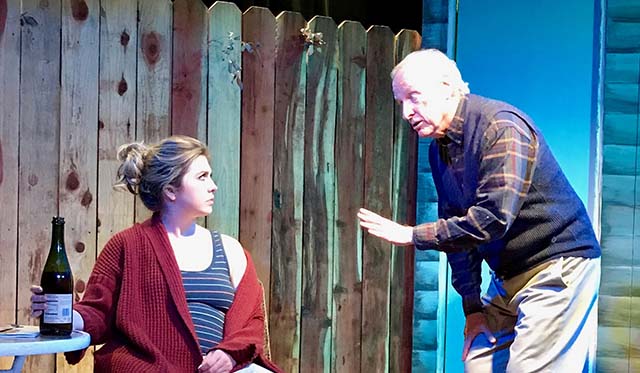 Playwright David Auburn debuted his smart and intriguing drama “Proof” in 2000.  Auburn was awarded the prestigious Pulitzer Prize for Drama and a coveted Tony Award as Best Play in 2001 for his efforts.

Artistic Director Jerome Elliott of Desert Ensemble Theatre Company (DETC) has a good theatrical eye and ear of what his audiences want to see and hear. “Proof” is a “theatrical intellectual think piece” that draws its audience into the world of mathematic geeks and brilliant minds, who spend their academic lives in search of the illusive “prime number” conundrum and other math mysteries in the hope of finding the key to unlocking one of mathematics’ most vexing unsolved mysteries.

Director Elliott stages his drama with a cast that features: Kelley Moody as Catherine, the gifted, conflicted younger daughter of Robert, a famous math genius who has mental issues; Lee Rice as Claire, Catherine’s older, annoying sister from New York, and Sam Benson Smith as Hal, a former mathematics PhD candidate of Robert’s at the University of Chicago; who has crush on Catherine.

The ensemble cast deliver nice character studies of flawed individuals.  Ms. Moody has the meatier role as Catherine, and she doesn’t disappoint in her scenes.  Mr. Dyekman as Robert, although short on stage time, he makes the most of it while on-stage.  Ms. Rice has some nice moments in her role as the prodigal sister who can’t wait to get back to New York.  Mr. Smith holds his own in the pivotal role of Hal.

The story is not linear in structure. It flashes backward and forward. So it’s important to stay engaged on what is taking place on-stage.

At curtain up, we see Catherine outside in the backyard of her Chicago home.  Her father Robert joins her and begins to ask if she will ever return to her studies as a budding mathematician?  She tells him she is considering Northwestern University.  Robert reacts with a slightly disappointing why there?  He teaches at the University of Chicago she should go there.  Catherine appears to be thinking about it; however, when she looks for Robert to discuss it and other things, Robert has disappeared; ghost-like.

Claire comes outside to chat with Catherine about her future plans now that Robert, their father, has died.  What will she do? Catherine is in favor of doing nothing. She is slowly shriveling up and withdrawing into a state where she believes mental issues are in her future just like their father, Robert.

When Robert was 25 years-old, mental issues began to slow him down.  He was famous and declared a mathematical genius by his peers.  He was at the height of his powers, only to be forced into retirement from his professorship and academia.  Catherine left school to nurse and take care of him.  Claire left for New York and a different life leaving Catherine to become their father’s caretaker.  Catherine has never forgiven Claire for abandoning their father.

Hal, an ex-graduate student of Robert, drops by the house to ask Catherine if he could possibly read any of Robert’s personal diaries and notes from his career.  Hal is working on a ”proof” project himself, and the notes and diaries would be helpful.  Catherine says yes and gives him the key to her father’s locked files.   Hal is an opportunist who while examining Robert’s files discovers another notebook separate from the others.  He decides to take the book without telling Catherine.

To reveal any more information at this point would diminish the impact of playwright Auburn’s clever think-piece.  So, no spoiler alerts from me.  You will just have to see the play for yourself.

This I can tell you.  The play reflects the contributions American women have made over the last fifty years in male-dominated professions.  In 2016 Hollywood celebrated their accomplishments in the Academy-Award nominated film “Hidden Figures.”

The film featured three African-American characters based on real-life events surrounding America’s first space pioneer John Glenn.  When a glitch occurred in the return trip to earth it took the mathematical skills of NASA’s two African-American women employees to get him safely back on Earth, and the beginning of cracking the “glass ceiling” was launched (no pun intended).  Today, women are found working at the highest levels of business and government and still raise families as well.

Director Elliott leads the creative team of Sierra Barrick, the Assistant Director, and Scenic Designer Lauren Bright who provides a nice backyard setting for the actors to perform their magic, Ashton J. Bolanos lighting designs, allows the audience to appreciate the costume designs of Frank Cazares.