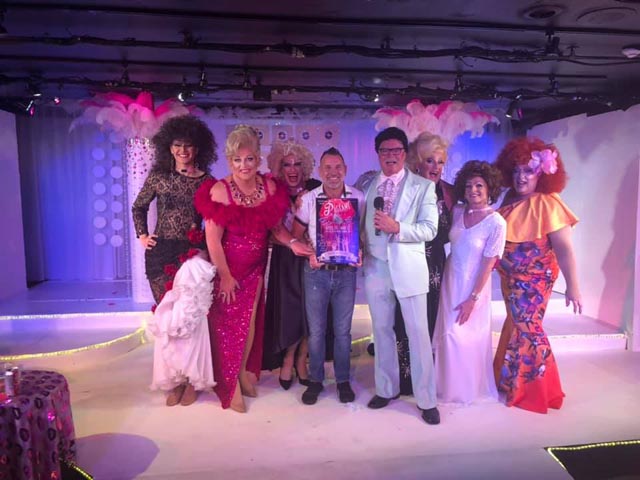 The Desert Rose Playhouse located in Rancho Mirage, Ca is the only theatre venue dedicated to serving the LGBTQ community of the Coachella Valley It has an excellent track record of presenting both gay-themed and straight productions over the years.

Quality writing with solid performance is an equal opportunity employer and is the goal of what really matters to any theatre audience.  As the Bard of Avon says “The plays the thing,” which is really the name of the game.

When the IRS and the Census Bureau counted noses of Coachella residents, it discovered that various election results over the years find the gay community of the Coachella Valley to be the dominant demographic.  Thanks to the valley’s vibrant theatre scene there is plethora of theatres to enjoy stage productions in all its forms and styles.

The Desert Rose Playhouse recently underwent a passing of the “management torch,” so to speak, from founders Paul Taylor and Jim Strait to Robbie Wayne, the new artistic director and to Kam Sisco, the new producing manager.  Paul and Jim now prefer the trade winds, beaches, and luau dinners as residents of Hawaii, our 50th State in their golden years of retirement.

However, when visiting the mainland and the desert they still attend Desert Rose Playhouse performances when available.  Messrs. Taylor and Strait set the bar high, and now Mr. Wayne and Mr. Sisco are dedicated to raising it even higher.

“Pageant,” a send-up musical about the world of beauty pageants everywhere, is created by Bill Russell and Frank Kelly and directed by artistic director Robbie Wayne.  According to director Wayne, the show is strictly a satiric comedy presentation intended to be just fun for the audience.  There is no hidden agenda message being delivered by its cast or the writers.

The story, such as it is, unfolds in a series of quasi-sketches performed by the cast that reflects the various judging categories in which the “ladies” compete on the road to becoming crowned “Miss Glamouresse” (think Bert Parks and the old Miss America pageants).

The faux Glamouresse beauty pageant is hosted by Franky Cavalier (Michael Pacas) who introduces the contestants and puts the ladies through their paces.  There’s a lot of tongue-in-cheek intro’s that the ladies endure before they get to strut their stuff. And it’s all done in the name good fun.

The production could be sub-billed as “Seven Guys and a Gal.”  The single female, however, doesn’t appear on stage in this “Pageant” production.  Jaci Davis, is the musical’s piano accompanist and a fabulous actor in her own right; makes sure the singer/actors on stage stay on key – which they do!

“Pageant” is a glittering, gorgeously produced, costumed musical that is a crowd-pleasing production. The technical credits of set design by Bruce Weber, and lighting design by the redoubtable Phil Murphy, along with glittering costumes created by director Wayne and Ruth Braun.

“Pageant,” is the final production of the Desert Rose Playhouse 2018-2019 season. Their traditional summer season show is “Ruthless the Musical,” which will perform from June 21st to July 14th, 2019.  The Fall season kicks off with Charles Busch’s comic melodrama “Die, Mommie, Die! “ inspired by the 1960’s movies of Bette Davis, Joan Crawford, and Lana Turner, as aging Hollywood divas who refuse to grow old as performers. Playdates for “Die, Mommie, Die!” are October 4 through October 27th, 2019.

The box office for Desert Rose Playhouse will be accepting reservations for “Ruthless the Musical” and season subscription tickets beginning the week of May 27th.