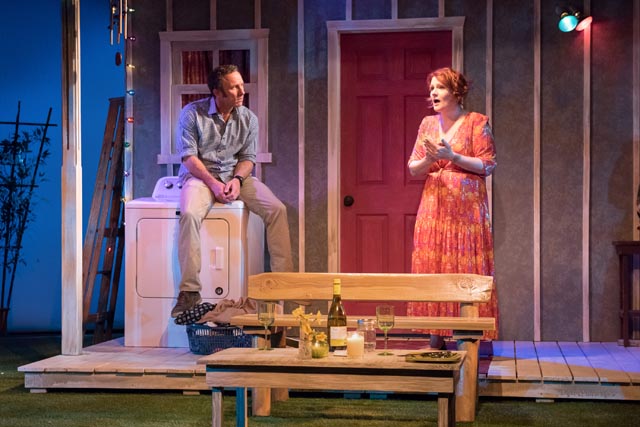 Composer Burt Bacharach and lyricist Hal David said it best back in 1965 with their award-winning song “What the World Needs Now is Love Sweet Love.”   That plaintive wail has been heard and echoing for eons on this weary but hopeful planet.

Love and hope are the only two constants that keep us hanging around ‘Waiting for Godot,’ so to speak, to use a mixed Samuel Beckett metaphor.  One must always remember that love and being in love, or finding love and staying in love is always a work in progress. It’s hard but rewarding work.

Dezart Performs, the Palm Springs award-winning theatre group, ends its first decade of producing quality productions with a winning and poignant southern comedy written by playwright Audrey Cefaly. The play wonderfully, seamlessly and sensitively directed by Deborah Harmon is a sweet story about ‘adult romance’ south of the Mason-Dixon Line that resonates and touches its audience on many levels.

Set in the present in a small town in Alabama, we meet widow Elizabeth “Lizzy” Nash (a terrific Kay Capasso), and widower Jack Key (Joel Bryant in a wonderfully nuanced performance) who initially meet in the back yard of their side by side homes.   Jack has purchased the house after the previous owner/ widow left the area.

Lizzie is the epitome of southern manners and hospitality engaging Jack in conversation and welcoming him to the neighborhood by delivering a freshly baked pie.  Jack is pleased with his gift as well as to discover that Lizzy is also unattached.

Backyards and porches are great places to set a two-hander play.  The set designed by Thomas L. Valach gives the two-character comedy plenty of space to work its magic on the audience. Professional Lighting designer Phil Murphy provides this production’s many mood-inducing moments thanks to the artistry of Murphy and sound designer and co-producer Clark Dugger, who perfectly complement each other’s theatrical technical chops.

The production’s lights and sound designs are perfectly ‘in sync’ making scene changes and transitions a great deal smoother in execution. Also, the costume designs of Barb Portinga, lend authenticity to laid-back southern life.  The characters’ bathrobes, nightgowns, Levi jeans, Tee shirts, and casual clothes are appropriate for the climate and changing weather.

The play features a typical southern rolling thunder and rainstorm backdrop scene designed by Dugger, lighting designer Murphy, and director Harmon. It’s a creative and effective piece of stagecraft that informs the audience of just how dedicated this splendid production team is to details.  Many times it’s the small details of a production that can turn a good production into an outstanding production.

However, as good as the creative team led by director Harmon is in its attention to details and props, and they are very good; indeed, the evening belongs to actors Kay Capasso and Joel Bryant.  This is an actor’s play, and these two marvelous actors know exactly how to please an audience. Their on-stage chemistry, stamina, and pacing allows them to always be in the moment in their performances. It’s good stuff.

I mentioned earlier that “love” is always a work in progress.  Well, it’s also about Lizzy and Jack, two adults, wounded by grief, wary of closeness and commitment, but perhaps, just perhaps, each is open to meeting and wondering if that illusive state we call “being in love” is once more available for them.

There are many hilarious moments in this comedy to be sure, and if one has been married, or still married or even widowed, there are smiles that will appear on one’s face, perhaps, in between a couple of tears thrown in for good measure.  Good memories never die. They just enrich our lives.

Playwright Cefley clearly knows the ups and downs of married life as well as widowhood. Her tender, yet frustrating, at times, familiar dialogue, is spot-on once Lizzy and Jack slowly and carefully grow toward one other. She has a great ear for the lilt and cadence of her characters speech patterns. The audience becomes fully engaged right from the get-go.  We become eve-droppers, much like the garden birds who see and hear everything that takes place between Lizzy and Jack’s backyards.  However, no more spoiler alerts from me.  You will just have to come and see for yourself how it all turns out. It’s a must-see production!

“Maytag Virgin” is an impressive and entertaining evening in the theatre that performs on the Pearl McManus stage of the Palm Spring’s Woman’s Club, through April 14, 2019. For reservations and ticket information call 760-322-0179.