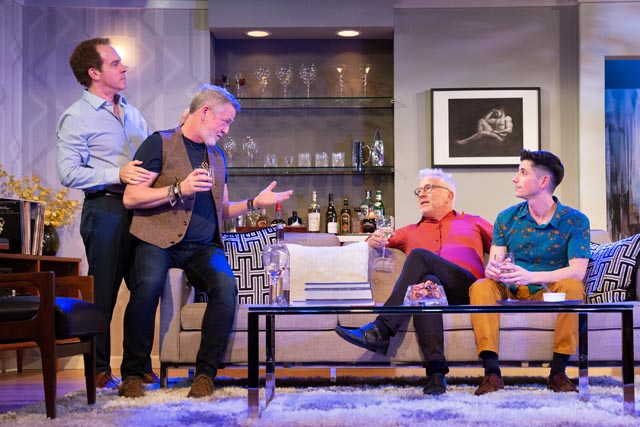 Dezart Performs of Palm Springs, celebrates the beginning of its 12th season of producing quality live theatre entertainment in the Coachella Valley, with a shattering, poignant, heart-rending, drama production about Gay marriage that reaches across all gender and identity lines.

Love is the most powerful emotion on this planet.  Its reach has no limits, stretching forever, touching, and capturing everyone in its path.  An anthem for both gay and straight people could easily be found in the music of Leonard Bernstein and in  the lyrics of Stephen Sondheim’s iconic musical “West Side Story” punctuated by a poignant duet sung by Anita and Maria, that best sums it up with “…when love comes along, there is no right or wrong.”  Words and a philosophy to live by. The country’s legal system finally legalized gay marriage in 2015.  Gays all over the world celebrated this historic moment.

In the award-winning play, “Daniel’s Husband,” insightfully written by Florida-based playwright Michael McKeever whose sharply observed play of gay partners in short or long committed relationships, comes into sharper focus by following two couples: successful architect Daniel Bixby (a terrific Michael Shaw) and his partner Mitchell, (a mesmerizing (David Youse) who collectively just suck all of the oxygen out of the on-stage acting space with their flawless performances.  More about the cast later.

There isn’t a weak moment or a misstep by this outstanding cast and/or the creative technical team led by director Darin Anthony.  Case in point: the beautiful set design by Thomas L. Valach, drew such remarks from audience members as “I’m ready to move into that home right now.”” to “I’s just gorgeous.”   It is indeed, and one of the most elegant and functional designs that fits so perfectly onto the intimate Palm Springs Woman’s Club stage that I’ve seen in a long time.

My reviewing critic/colleague Bonnie Gilgallon of the CV Independent, nails the appeal of this play in her excellent review of “Daniel’s Husband” when she references the “flawless” quality and the powerful impact of the entire production.  I couldn’t agree more with her assessment.

In the world of theatre, there is no substitute for quality writing.  It galvanizes and energizes the performances of everyone in the production, elevating all of the floating boats in the harbor, so to speak.  When actors are presented with a terrific property, they respond in kind, which becomes a huge benefit for the audience.  And that is precisely what we have with this impressive Dezart Performs’ production of “Daniel’s Husband.”

The performances from this gifted ensemble cast is what every critic wishes for before we settle into our seats.  Theatre is the art of telling a tale so compellingly that one cannot take one’s eyes off the stage and/or certain characters.  Everyone, cast crew, and audience are fully engaged in what is unfolding on the Dezart Performs stage night after night.  That’s the gold standard and goal to which every theatre company aspires.

The vision of director Darin Anthony enriches this production with his many wonderful directorial touches.  And that’s not as easy as it sounds.  Remember, Anthony has four award-winning actor/directors in his cast to contend with when it comes to making important decisions.  Yes, theatre is first and foremost, a collaborative art form, and professionals always adhere to the one director rule in a production.  However, I sure would have enjoyed being a fly on the wall during rehearsals. Spirited discussions, no doubt, abounded during their rehearsals among five directors.

Michael Shaw, as Daniel, a successful architect, delivers a memorable and deeply affecting performance as the partner who aches to be married.  Mitchell, an equally successful author, and partner of seven years with Daniel doesn’t believe in gay marriage as an institution, is brilliantly played by David Youse, in a highly nuanced tour de force performance.

The play begins with a dinner party with another gay couple.  Barry Dylon, Mitchell’s agent (solidly portrayed by Chuck Yates), and Barry’s new, 20 something, wide-eyed boy toy Trip (Hanz Enyeart).  Over drinks Trip innocently asks Mitchell, you two seem to just be made for each other. Why don’t you get married?

The comment sets Mitchell off on his standard tirade on the efficacy of gay marriage.  “Why do we need a piece of paper to prove we love one another” is the rhetorical question Mitchell tosses out whenever pushed to tie the knot.  Daniel, however, sits stone-faced, as Barry calmly observes the scene with the knowledge that his client is a will of the wisp when it comes to settling down.  Living together with Daniel? Yes. Legally married to Daniel?  No.   It’s the only bone of contention in their relationship.

When the doorbell suddenly rings, the tension in the air quickly dissipates.  Daniel’s mother, Lydia Bixby (Deborah Harmon), makes a grand entrance dressed to the nines slyly claiming she just wanted to see how her “two boys” were doing before going off to a previous engagement.  Ms. Harmon’s portrayal of a waspish, controlling mother whose only concerns in life are all about her, is spot-on.

What could possibly go wrong when Mitchell’s prospective mother-in-law is just dropping by to see how two adult men are doing?  Plenty. Stay tuned. But no spoiler alerts from me at this point. But what I can say is the following. The first 15 minutes of the play unfolds as a comedy, peppered with terrific dialogue ala Neil Simon like zingers aplenty; however, it shifts into a drama of consequence later on and right up to the end.  The play is performed without an intermission and runs approximately 90 minutes.

This impressive production is produced by Michael Shaw and sound designer Clark Dugger. It is also one of their finest productions over the last eleven years, which I suspect will be taking home several Desert Theatre League (DTL) Stars Award trophies come October of 2020.  “Daniel’s Husband” performs on the Pearl MacManus stage in the Woman’s Club of Palm Springs and runs through January 19th.  It’s a Must-See Show!