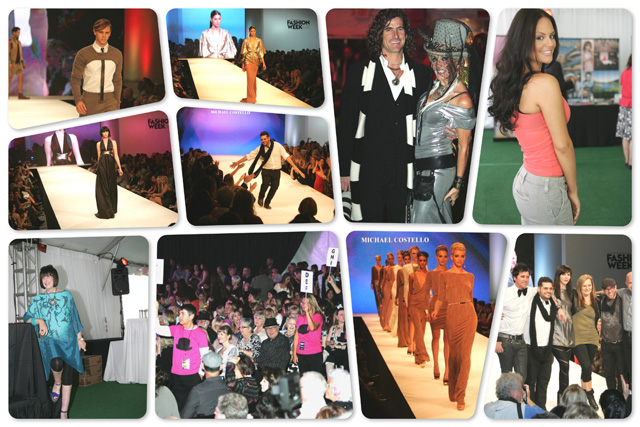 Wednesday the Cast of Project Runway arrived by limo to the big white tent on Larkspur next to the main Tent where all the runway action takes place. The designers spoke about their designs for the Media. They held a Q & A for reporters and photographers emceed by Style Maven, Susan Stein. They thanked our own local fashion designer and cast member, Michael Costello for bringing them to the Desert and Fashion Week. They all said this is an important venue because they can’t become known if no one sees what they produce. Shows are where they can bring what they create to the public

Wednesday night brought all the designers to the runway with the fashions they made. They had little time to get the models ready, hair, makeup and outfits and gowns that fit to best showoff their creations. A cocktail reception was held prior to the runway show. The show lasted about an hour with standing room only in the main tent. The audience clapped after each time the styles were shown and the designer was introduced. A lot of oohs and aahs were heard when the audience saw something special they liked. Our own Local Michael Costello got a larger applause as he came on the runway. He touched hand with the people next to the runway and he was the last designer of the night.

There was only one fashion designer that brought men’s clothing. the models Hair, Make-up,plus the Jewelry and accessories were chosen by the artist. Each fashion stylist had different styles to show. American Idol finalist Pia Toscano sang a couple songs from her new album for the audience.

A trunk show was held on Thursday afternoon where customers could buy the items shown on the runway on Wednesday evening. They could be able to order each item in their own size if none were available. There was a long line of women waiting for the doors to open for the trunk show. Personal contact with the designers and talking to them about the items they purchased is a once in a lifetime opportunity. Fashion Week just keeps getting bigger with world wide attention.

The weekend will be the food and wine events. This event will test the taste buds of the best critic. One does not want to miss this special time of Fashion Week. Top designers and the best in foods and wines is a great way to finish this grand event.