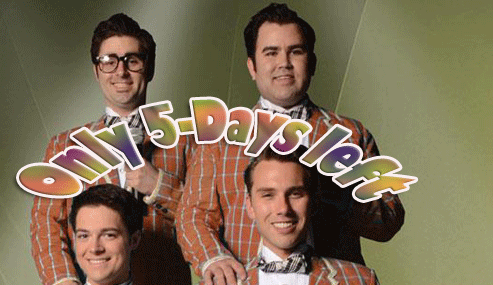 Musicals always seem to hit the right spot with theatre audiences. Perhaps, it’s a way to escape the troubling economic times, or the unsettling international news we read about in newspapers and on the Internet. Whatever the reasons, the Palm Canyon Theatre’s production of “Forever Plaid” originally written, choreographed, and directed by Stuart Ross, is a crowd pleaser.

In this version, under the direction of Palm Canyon’s excellent musical director David McLaughlin, along with choreography by Andrea Bellato, “Forever Plaid” ethereally flies across time zones and the heavens in the form of four singer/actors (in four-part harmony no less) and gently returns them to Mother Earth and the stage nicely designed by resident scenic design wizard J.W. Layne.

Unless you have been living in a cave somewhere, the story of “Forever Plaid” is the story of four young singing friends, who, on their way to their first singing gig as professionals, leave the planet forever courtesy of a bus loaded with teenage catholic high school girls on their way to a performance of The Beatles” on the Ed Sullivan TV show. The bus and girls were spared in the accident. Our intrepid singing foursome, however, weren’t as fortunate. But, through heavenly interventions and machinations, known only to a few, they are miraculously allowed to return to earth for a one time performance, as “Forever Plaid”.

A four-part harmony group is the epitome of an “ensemble performance”. It doesn’t get any closer than that. Four sing as one and then solo when called on. Starring as the singing “Plaids” are Erik Bradley as Smudge, Daniel Lee Dehnert as Frankie, Anthony Meyer as Sparky, and Jacob Samples as Jinx. The show also provides and features the piano magic of Brit Endsley, the group’s onstage accompanist.

The Plaids infuse a lot of energy and comedy into their routines and performances, which director David McLaughlin has orchestrated into a thoroughly entertaining evening of musical theatre. The evening’s program consists of sixteen musical numbers that bring smiles, laughs, and moments of nostalgia. Musical numbers are capricious in that they are equal-opportunity providers. What pleases some members of the audience doesn’t necessarily resonate with other groups or individuals. Such numbers as: “Three Coins in a Fountain”, “Moments to Remember” “No Not Much”, “Perfidia”, “Cry”, “Caribbean Plaid/Matilda”, “Lady of Spain”, “Shangri-la”, and “Love is a Many Splendored Thing”, however, appears to meet everyone’s criteria.

Opening nights are always exciting, and on occasion, a slight case of the jitters can run through a show. Opening night for “Forever Plaid” had one or two bumps, and a prop blip, but once everything settled down, it was smooth sailing for this well-crafted production. You can bring both Grandma and junior to this show where both will be entertained and enjoy the evening. Not always easy to do these days.

“Forever Plaid” at the Palm Canyon Theatre runs through July 15th. For reservations and ticket information call the Box Office at 760-323-5123.