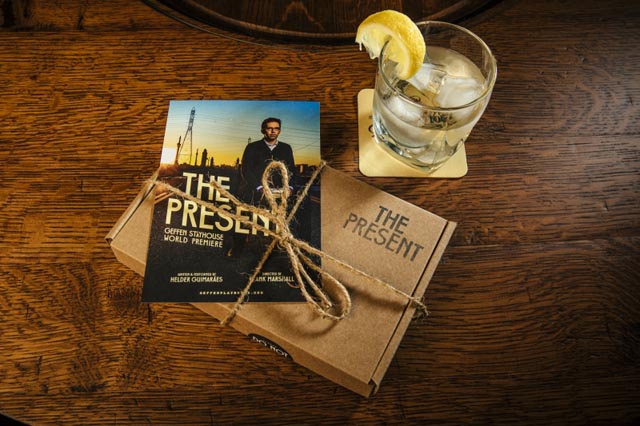 One of the most successful series of performances at the Geffen Playhouse have been the one-man shows by Helmer Guimarães; the most recent was last summer’s hit “Invisible Tango” directed by Frank Marshall. Guimarães’s mix of mind-boggling magic combined with autobiographical memoir, has proved to be box office magic for the Geffen.

When COVID-19 put an end to live theatre as we know it, theaters were scrambling to reinvent themselves. The Geffen Playhouse (now known as the Geffen Stayhouse) was one of the first legit houses in Los Angeles that expanded their vision beyond the parameters of the physical building to create a vehicle by which starved theatergoers can get their fill of live performance. Using the Zoom platform, the Geffen has created THE PRESENT, an interactive show that not only invites the audience to view, but also to participate in real time, with magical results.

Guimarães is a gifted illusionist and master storyteller, as well as trained actor and writer; this collaboration with Frank Marshall has shown once again what can be accomplished when two great creators join forces for good.

Rather than ignoring the fact that we are in a global pandemic, Guimarães hearkens back to a time in his own childhood where he endured three months of quarantine following a serious hit and run accident where he sustained cranial trauma. His parents keep him from school and, as they both work, have his grandfather come and keep an eye on him all day. The reserved grandfather and the recovering grandson forge a hard-won friendship over a deck of cards. The young Guimarães both teaches and learns about the power of magic and also discovers, albeit some years later, that his grandfather is a man of great depth and wisdom. The lessons they both experience change both of their lives profoundly.

THE PRESENT takes place virtually via the Zoom platform with a maximum of 25 participants per show. Each participant is mailed a sealed mystery package in advance, the contents of which are only revealed during the course of each performance as Guimarães’ story unfolds. In a unique twist, the show provides both a virtual and physical experience for the audience, as magic also takes place in their own hands, in their own home environment.

The most intriguing item in the mystery box is a deck of cards; it’s not a special deck, just your standard playing cards, but it allows the participants to actively do their own card magic at home and believe me, it’s a stunner.

I have always believed in magic; I don’t want to know how it’s done, I just thrill over the “wow” moment that occurs at a trick’s conclusion and enjoy the feeling of being a child all over again.

The show has proven to be a solid hit for the Geffen; there was a first extension, then a second, both which sold out within 30 minutes of being released. Currently, the show is playing through August 16, but may be extended again. Visit https://www.geffenplayhouse.org/tickets/the-present-notification/ to be notified when/if additional shows are added. Tickets are currently priced at $85.00 per household.

The title THE PRESENT has multiple meanings: it deals with the here and now, as well as the infinite joy of discovering something that is unexpected and to be treasured. The same can be said of the talents of Guimarães and Marshall (who has a gentle, gifted hand with his star performer) and I eagerly await further collaborations between these two kindred spirits. If you get a chance to attend, you won’t be disappointed.