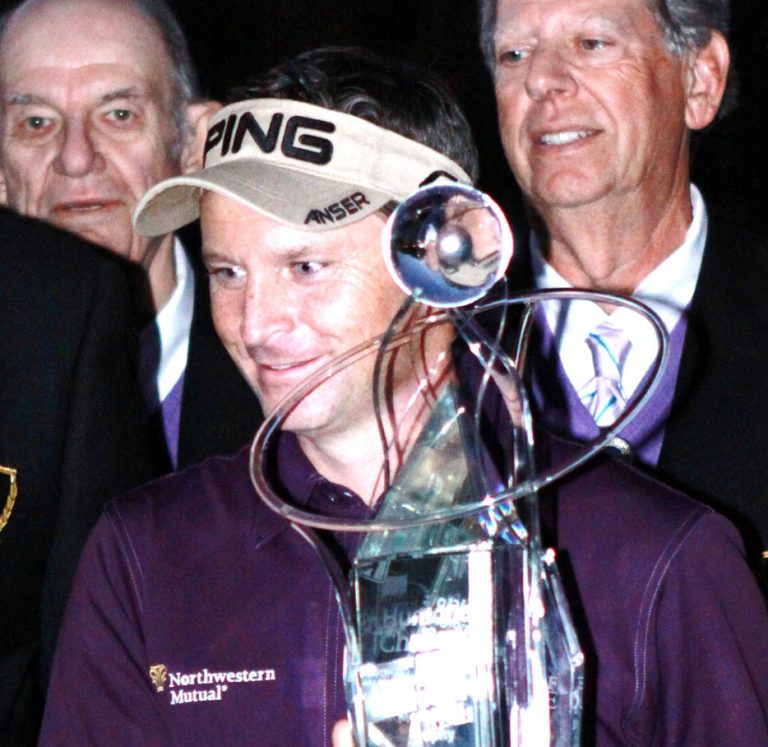 The Humana Challenge Golf tournament winner was Mike Wilson on Sunday. He ended the tournament with a fabulous-24. Three others were close behind with-22. Those were John Mallinger, Robert Garrigus and Johnson Wagner. Robert Garrigus missed an eagle putt on 18 that would have forced a tie. He ended up with a par. Mike Wilson made a birdie putt on 18 to cinch the title. The tournament ended just before dark. Check and trophy were given to him almost in the dark on the 18th green.

Mark Wilson is a member of at Ironwood Country Club here in the Desert. This is his 5th win on the PGA tour circuit. He was awarded a check for $1,008,000 and the first Bob Hope Memorial Trophy. The trophy is made of glass with a glass ring around a world globe. After his win he picked it up for the media to take photos. The glass ring broke off but he thought it could be fixed. He posed for photos with the broken trophy and a big smile on his face.

There were several golfers in the hunt until the final round. Play was cancelled on Saturday when gale force winds knocked down tents, score boards and broke down palm fronds on all 3 courses. It became dangerous to golfers and fans so the pro-am part of the competition ended. Golfers continued the round on Sunday morning. Phil Mickelson and Greg Norman were given special invitations by President Clinton. Phil Mickelson made the cut and finished with a 278.

All Photos by Pat Krause Copyright 2012