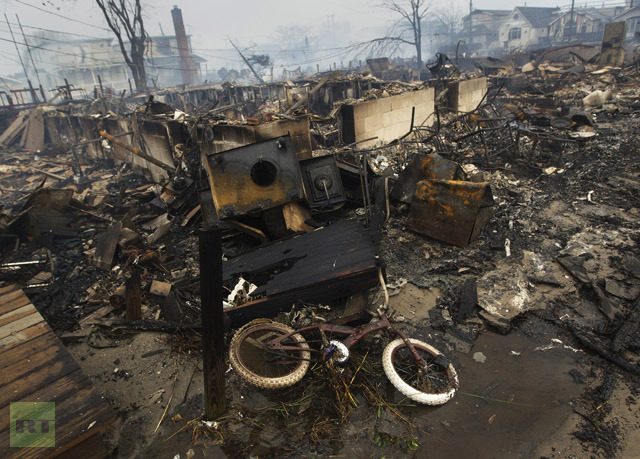 Parts of Brooklyn, Manhattan and Staten Island are underwater as hurricane Sandy passes over New York. Much of the city is now without power, and mass transit has been shut down until further notice.

Sporadic explosions could be heard throughout the city. Emergency 911 operators were receiving 10,000 calls per half hour, NYC Mayor’s Office reported.

Downed power lines had sparked numerous fires that continue to engulf the city. First reports of major fire were coming in from the Rockaway Park area of Queens, New York. A few hours later, fire engulfed 15 houses in Breezy Point, Queens, and 190 firefighters were on site battling the blaze. Fire has reportedly destroyed 50 houses.

Due to power outages and generator failure dozens of ambulances had to evacuate more than 200 patients from two Manhattan hospitals to Sloan Kettering and Mt. Sinai hospitals.

More of the story…