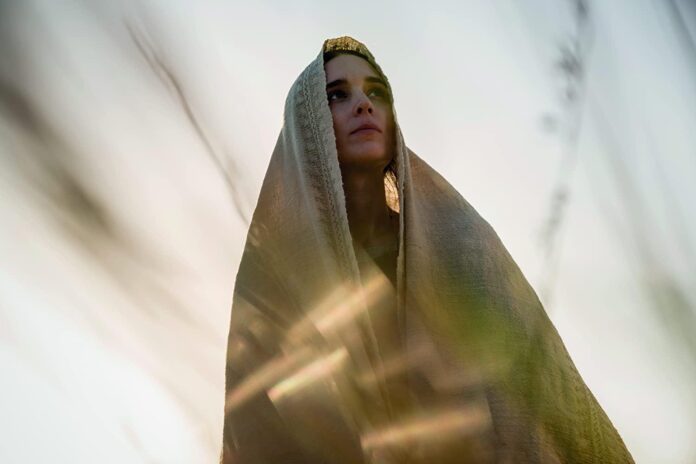 The Easter Holidays usually brings not only religious celebrations like Passover and Easter, but other arts entertainment as well.  For years audiences have been treated to the retelling of and recreating the lives of historical religious figures both of the Christian and Jewish faiths through books, plays, TV and films.

This year, however, an uninvited guest engulfed the entire globe with a visit from what we now know to be the COVID-19 Pandemic; resulting in the cancellation or postponement of all arts entertainment venues in California and across the country.

Frustrated theatre critics and arts writers have resorted to writing about the current state of theatre and its future and by reviewing films that appear on TV streaming platforms or by video rentals as a way of surviving during the country’s shutdown. The public’s appetite for entertainment, however, has not abated.  It keeps growing with lengthy quarantine lockdowns fueling the need for coming to grips with those pesky “sheltering in place.” mandates.

Showtime, recently screened the intriguing 2018 movie “Mary Magdalene”, written by Helen Edmundson and Phillipa Goslett, directed by Garth Davis.  This provocative, revisionist, version (with undertones of the current worldwide feminism movement) gives one the opportunity to think outside the accepted “biblical box” concerning the role of women in history both religiously and socially.

Patriarchy has been with us since first cave man ventured out with his club and returned with his mate; who no doubt was probably kicking and screaming all the way.  Mary Magdalene of the movie is a free spirited young woman who flees the marriage her family has arranged for her.  Mary, who prefers to make her own decisions about her life is hauntingly and introspectively portrayed by Rooney Mara, who projects an inner grace and glow of knowledge and enlightenment whereas the close male followers of Jesus – the twelve Apostles; in particular, Peter (nicely played by Chiwetel Ejiofor) and Judas Iscariot (solidly portrayed by Tahar Rahm, are not always convinced of the efficacy of Jesus’ mission.

Will this new movement succeed in proselytizing others into joining it?  The obvious answer is yes.  However, it will take 300 years of incubation before Christianity becomes a major player on the religious landscape.  The beauty of this film lies in the bold approach of screenwriters Edmundson and Goslett in making Mary Magdalene the main protagonist, under the brilliant revisionist direction of Garth Davis.

The movie story set in the first century in the Holy Land during the time of Roman rule, explores the heightened messianic period of the time.  The Jews under the rule of King Herod a Roman puppet, are steadfast in honoring their traditions and loyalty to their messianic expectation; which one day will be fulfilled as their core prophecy states.

Amid the unrest and turmoil of these turbulent times Jesus of Nazareth played by gifted but quirky Academy Award-winning actor Joaquin Phoenix, is costumed to look more like the middle-eastern Jews of the period.  He has the look of authenticity: He is somewhat short, bearded, swarthy complexion, unkempt black hair, dark eyes and soft spoken.  Ironically, Phoenix’s Jesus visually resembles Charles Manson.

Jesus, a young rabbi and carpenter is gathering large crowds wherever he goes to listen to his powerful message of a new beginning for the Jewish people and all others:  simply put, the redemptive power of Love and not the folly of war, is the answer to mankind’s tribulations and suffering.  God is still the Supreme entity, but this new message of “Love” is being introduced through the presence of Jesus, a member of the Jewish underclass who is its Herald of ‘the good news’ for earth from the Father, by way of the Son.

Director Garth Davis has gathered an international cast of talented actors to flesh out the familiar New Testament storyline often referred to as ‘the greatest story ever told’, which in my opinion faithfully follows the biblical journey of Jesus.  The freshness and POV of Davis’ creative team of artists is what makes this film so compelling to watch.

Rooney Mara’s Mary performance brings an almost ethereal inner quality of insight to her spiritual awareness portrayal.  It’s reverential and understated but it’s totally honest.  And the camera loves her: High cheekbones, classical profile and the ability to sustain her on camera moments long after the scenes are over become performance plusses.  Noel Coward called actors who possess these attributes and gifts as having “star quality”.  The on-screen chemistry between Ms. Mara and Mr. Phoenix is palpable.  The two stars off-screen are a real-life couple which might account for their on-screen compatibility as both creative artists and as screen characters.

Additionally, players delivering solid support include: Irit Sheleg as Mother Mary; Theodoros Theodoridis as Lazarus; Luba Azabal as Susannah; and Shira Hass as Leah.  None-the-less “Mary Magdalene” is Rooney Mara’s movie.  The irony of Mary Magdalene is that of the twelve apostles who followed Jesus, she was the only one who actually “got” the message that he was preaching.  In 2016 Pope Francis rectified this oversight; rightfully restoring St. Mary Magdalene as Christ’s true 13th Apostle.

There is a saying in Hollywood…”if you buy the premise, then you will also buy the bits.” It’s one of the best biblical movies I’ve seen in a long, long, time.   But, it’s not without some required tidying up.  One, its pacing is glacial at times which doesn’t sit well with younger audiences or with this audience of one.  Two, it’s tad too long for some audiences with short attention spans, and three its biblical subject matter unfortunately is viewed as bit of a turn off by some audiences without ever seeing it.

It’s a pity that this provocative and intriguing movie with top-tier talent only earned $ 11.7 million in box office receipts.   Now that America is experiencing stay-at-home warnings for a spell, you can now see it on various platforms and streaming services without ever leaving your couch or favorite chair.    Don’t keep challenging the premise of the film as you watch.   Let it unfold on screen and go with its flow…. then form your opinion.