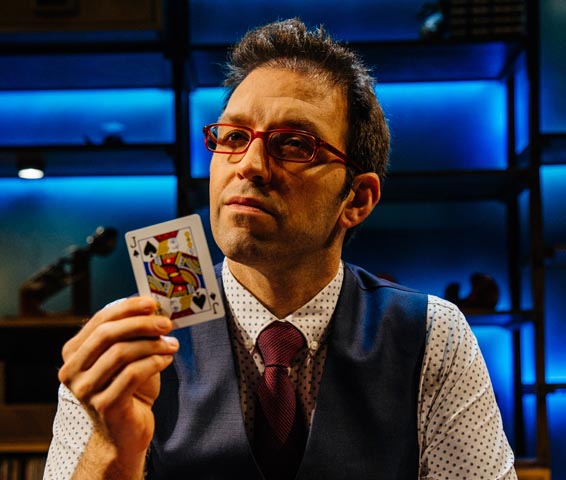 Ah, sweet mystery of life, at last, I’ve found you…in the form of an unassuming yet brilliant close up magician named Helder Guimarães whose one-man show is currently gracing the Audrey Skirball Kenis stage at Westwood’s Geffen Playhouse. The small theater has been transformed into a mid-century modern apartment with an elegant bookshelf back wall filled with fascinating items that look innocent, but…one never knows in this tour de force, ably directed by Frank Marshall. Yes, that Frank Marshall, the award-winning producer, and filmmaker, who helped bring “Raiders of the Lost Ark” and other Spielberg hit films to life.

But, I digress. From Guimarães enigmatic first appearance, where he tells a story of his first car accident in Los Angeles, to his final philosophical musings 80 uninterrupted minutes later, Guimarães lays out the premise for the show, for his life and maybe yours too: Everything happens for a reason.

Borrowing from the time-honored tradition of close up magic that engages audience members in the sleight of hand tricks, Guimarães charmingly interweaves personal stories about his discovery of a hand-written journal he finds in an antique store that pulls him into a multi-year quest to discover the identity of the author, himself a magician. We also hear about his enigmatic friend Gabriel, a retired clown once painted by famed portraitist Bernard Buffet.

If you have ever been amazed and confounded by the magical disappearance/reappearance of a card, or by the prestidigitator’s uncanny ability to be able to read an audience member’s mind or predict their action in advance, this is the show you must see.

Kudos to the Geffen for bringing Guimarães back to the Playhouse. His previous show for them, “Nothing to Hide,” was one of the most popular shows in Geffen history. This is a finely tuned vehicle for its star who also wrote the book with help from Dramaturg Amy Levinson. Moby contributes a sensual, atmospheric original score recorded and performed by him and the East Side Jazz Monkeys.

Scenic Designer Francois-Pierre Couture, Lighting Designer Elizabeth Harper, and Sound Designer Alex Hawthorn are all integral players in this production, and their work is outstanding yet understated.

Part memoir, part prestidigitation, “Invisible Tango” is lovingly underpinned with a philosophical motif that what is life without mystery. At one point, Guimarães offers the audience a chance to find out exactly how he pulls off each of his unbelievable feats; director Marshall says that no one has taken him up on the offer so far. Perhaps we still need to believe in magic in a world that is desperately seeking to reclaim its soul.Invisible Tango is performed with no intermission, 80 glorious minutes long. The show runs until June 30. For more information on tickets, please visit www.geffenplayhouse.org