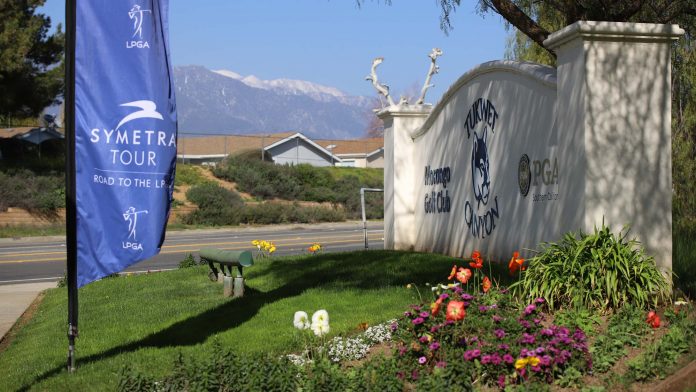 Beaumont, CA.— The third stop on the 2019 “Road to the LPGA” takes the Symetra Tour to Morongo Golf Club at Tukwet Canyon in the Golden State for the fourth annual IOA Championship presented by Morongo Casino Resort & Spa from March 29-31.

Greeting the 144-player field in Beaumont, Calif. is a total purse of $125,000. Individuals are set to compete in a 54-hole stroke play format with a cut to the low 60 players and ties after 36 holes.

Defending champion Stephanie Meadow (Jordanstown, Northern Ireland) is not among the competitors, as she was a 2018 Symetra Tour graduate. The victory in Southern California helped the four-time First Team All-American for the University of Alabama (2010-2014) finish at No. 6 in the Volvik Race for the Card.

SC FEATURED STAR SHERPA NAMED AN IOA CHAMPIONSHIP SPONSOR EXEMPTION
She burst onto the scene through an ESPN “SC Featured” documentary. Now Pratima Sherpa is getting a chance to continue chasing her dream of becoming Nepal’s first female golf professional.

Sherpa will venture to Riverside County to compete in the IOA Championship presented by Morongo Casino Resort & Spa as a sponsor exemption. The third event on the 2019 Symetra Tour calendar will be the Kathmandu native’s first start in a professional tournament in the United States.

“Being from Nepal and from a poor family, I had never imagined my identity could become a national golfer of Nepal and today I am in the U.S.A. because of golf,” said the 19-year-old, who will compete as an amateur. “I feel so proud to say that I am the first Nepali who has been invited by the LPGA to play in a tournament with the Symetra Tour. This is a really big opportunity in my life. In fact, this is like an achievement for my country.”

Released on April 22, 2018, ‘A Mountain to Climb,’ reported by Tom Rinaldi and directed by Kristen Lappas, chronicles Sherpa’s journey to defy all odds, as she grew up living with her parents in the maintenance shed at Royal Nepal Golf Club.

“Anyone watching Pratima’s story is immediately struck by the insurmountable odds she has already overcome,” said Mike Nichols, the Chief Business Officer of the Symetra Tour. “She has an optimism and spirit that is both infectious and inspiring. We are proud to play a small part in writing the next chapter of her incredible story.”

In January, the Montano family of Ventura, Calif., brought Sherpa into their home to provide an opportunity for education and platform to train for the game she loves. Sherpa is enrolled at Santa Barbara City College and practices with their golf team while also working with swing coach Don Parsons, who instructed Mike and Tanya’s daughter Sophia, a former college golfer.

“Before coming here, her days were mostly filled with golf and now she is learning something new with academics, exercise and having to balance it all,” said Sherpa’s host mom Tanya Smith-Montano. “Since she arrived, there has been a bit of an adjustment. It’s a completely different academic system. Our goal is for her to receive a four-year college degree so she can have many more opportunities back in Nepal. At the same time, we want her to pursue golf and her dreams.”

They originally learned about Pratima’s story through the writing of Oliver Horovitz, who visited Royal Nepal Golf Club in 2016 to write a magazine article about golf in the country, as well as from Sophia and her time in Nepal with the study abroad program at Pitzer College of the Claremont Colleges consortium. In July 2017, the Montano family initially opened their home to Sherpa so she could compete in regional junior tournaments across Southern California.

Since stepping back onto American soil earlier this year, the transition is going smoothly. Sherpa is working to obtain her driver’s license and even attended the PGA TOUR’s Genesis Open to watch childhood idol Tiger Woods, who she met and was able to hit golf balls with in previous visits to the United States.

Among all the firsts in recent years—from eating ice cream, seeing the ocean, learning to swim and even riding a bike—she will now add another to the list in the form of teeing it up at an event on the official qualifying tour of the LPGA.

“I believe playing in a Symetra Tour tournament will help me become more confident for upcoming days and I am hoping to learn many new things,” Sherpa added. “I have always had a dream to play on the LPGA. I never imagined that dreams can become a reality in such a very short time. I always follow two things in my life: nothing is impossible and hard work always pays off. Being invited by the LPGA and Symetra Tour has helped me to prove these things.”

COUNTRIES (AND STATES) OF THE IOA CHAMPIONSHIP

A total of 37 countries are represented this week at the IOA Championship presented by Morongo Casino Resort & Spa, led by the United States with 69 players and Spain having the next highest of seven competitors.

“It’s really awesome to see so many international players on the Tour and a great honor to represent your country at this level,” said Milagros Chaves (Asuncion, Paraguay), who is coming off a tied for 11th finish in the Florida’s Natural Charity Classic. “I played for the national team most of my amateur career and to still represent Paraguay as a professional is incredible. One of my biggest dreams is to represent my country in the Olympics.”

Individuals from 23 different states are also set to tee it up at Morongo Golf Club at Tukwet Canyon. A total of 18 players hail from the host state, while Florida and Texas each boast eight.

“Having a tournament on the West Coast is exciting, especially in SoCal near my home,” said Jenny Coleman (Rolling Hills Estates, California), who grew up just 95 miles from the tournament venue. “It’s nice to play on grass that I grew up on, including bent and poa. I can’t thank IOA enough for sponsoring three tournaments and being a key supporter of the Symetra Tour.”

Numerous professionals in their first year on the Symetra Tour have made the trek to Riverside County, as 34 rookies are in the field and eager for the third event of the Symetra Tour season.

Among them is Dewi Weber (Groningen, Netherlands), a University of Miami (FL) alumna with three collegiate victories to her name. In 2017, Weber was named to the All-ACC Team and a Women’s Golf Coaches Association (WGCA) Second Team All-American as a sophomore for the Hurricanes.

“As far as my transition from an amateur to professional, I think it went fairly easy,” said Weber, who has finishes of tied for 13th and tied for 14th in the first two events of the season, respectively. “I’m lucky to have a good team of coaches and management. Of course, there are things you can’t prepare for and just have to experience. The good starts were little confidence boosters, showing that I belong.”

VOLVIK RACE FOR THE CARD UPDATE

The Symetra Tour annually awards LPGA Tour membership to the top players on the season-ending Volvik Race for the Card money list and will usher in the next graduating class after 24 events on the 2019 calendar.

With two tournaments in the books, the top-10 underwent some shifting following Florida’s Natural Charity Classic. Eight members from the group are in Beaumont this week, including Csicsi Rozsa (Budapest, Hungary) at No. 8 thanks to a tied for fifth result in the inaugural SKYiGOLF Championship.

“Starting the season with a new event is a little scary, but it’s also exciting to play a new venue and have new fans watching,” said Rozsa, who missed the cut in Winter Haven before earning a spot in the Bank of Hope Founders Cup on the LPGA Tour through the Monday qualifier last week. “Finishing top-five provided an extra boost for the year and then to shoot the lowest score in my professional career to qualify for my first LPGA Tour event was the cherry on top. The Symetra Tour is a gateway to the LPGA, but it also gets you ready for what is waiting once you’re there. After an amazing week at the Founders Cup, I felt right at home and am even closer to my dream than ever before.”

From 1999-2002, the official qualifying tour of the LPGA handed out three cards. Then from 2003-2007, that number increased to five before 10 were distributed starting in 2008. Since the inaugural year, a total of 147 players have graduated to the big stage.