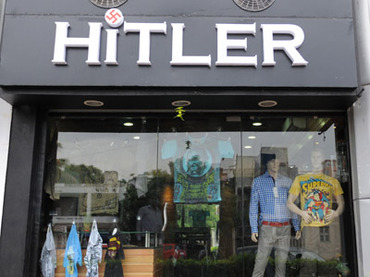 There’s one shop in India that local Jews won’t stop by at any price: the one called “Hitler”. The owner of the clothing outlet in Ahmedabad claims it’s merely a “nickname given to one of the proprietors’ grandfathers.”

“Hitler was a nickname given to my business partner Manish Chandani’s grandfather because of his strict nature. Frankly, till the time we applied for the trademark permission, I had only heard that Hitler was a strict man,” Rajesh Shah who owns the shop told The Times of India daily.

“It was only recently that we read about Hitler on the internet,” he added.

Shah complains he had to spend Rs 40,000 on the banner, and says he won’t change the name unless he is compensated.

“In the city of Mahatma Gandhi and non-violence, how can anyone celebrate a person like Hitler who is known to have murdered millions of unarmed ordinary civilians? We as a community had represented our concerns to the proprietors and we do not think they agree with us,” Nikitin Contractor, convener of the Friends of Israel organization from Vadodara was quoted as saying.“Youngsters need to be told of the atrocities that Hitler committed and the millions who were killed in gas chambers more than 70 years ago.”

Some members of the Jewish community claim the proprietors know what Hitler’s name stands for.

“They had researched well, right from the clothes the dictator wore to his cufflinks. We had suggested a separate design, but the proprietors claimed that the name brings good business since its launch a week back.”