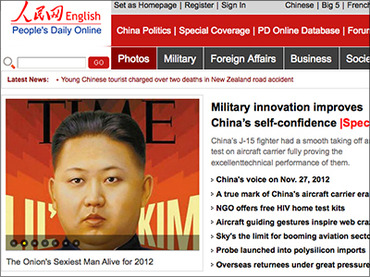 North Korea’s leader has made it to the homepage of China’s biggest newspaper, dutifully informing readers that Kim Jong-un was named Sexiest Man Alive 2012. The editors were not deterred that the award came from The Onion, a US satirical magazine.

Chinese People’s Daily Online positions itself as “one of the world’s top 10 newspapers,” so seeing an Onion piece on Kim Jong-un appear on its main page makes a reader look twice: this has to be a joke.

But no, there’s no kidding with Pyongyang. The caption under the image of North Korea’s supreme leader on the main page – The Onion’s Sexiest Man Alive for 2012 – looks exactly as if Kim Jong-un were picked the Man of the Year by Time magazine.

Inside, a presumably statesmanlike image of Kim astride a powerful steed is followed by a flat quote from The Onion:

“With his devastatingly handsome, round face, his boyish charm, and his strong, sturdy frame, this Pyongyang-bred heartthrob is every woman’s dream come true. Blessed with an air of power that masks an unmistakable cute, cuddly side, Kim made this newspaper’s editorial board swoon with his impeccable fashion sense, chic short hairstyle, and, of course, that famous smile.”