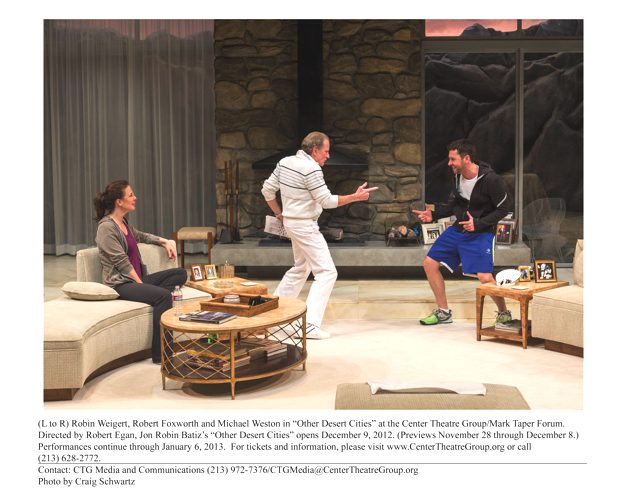 As a Palm Springs-based theatre critic, I felt I had the inside track on Jon Robin Baitz’s insight concerning his latest play “Other Desert Cities”, now on the stage of LA’s Mark Taper Forum.   I was partially correct.  I did indeed get all the inside jokes and sly references to Palm Springs and the desert paradise landmarks and restaurants, but somewhere between the beginning and the end, I think I missed the main thrust of his piece.  Is “trust” a word that comes into play here?  How about “honesty”?  Anyone for “believability”?  In short, Baitz’s script and story failed to engage me, despite a couple of nice turns by actors Robert Foxworth, Robin Weigert, and a young-looking, trim Jo Beth Williams.

It’s not like I don’t know who Baitz is.  I do.  I remember the excitement surrounding “a local boy”, so to speak, (born in Los Angeles, but raised in Brazil and South Africa) a playwright who had one of his earlier plays “Substance of Fire”, performed at the Mark Taper Forum a few years back.  And I’ve followed his career ever since.

When success comes early, as with Baitz, the expectations grow with each new play produced.  Sometime it’s a headline ripped from the papers, or wire services.  Sometimes it’s a personal demon or an incident in which the author is personally involved or the story points are so compelling, its story must be told.  Hopefully, one of these premises will resonate with audiences.  If one can believe New York Times theatre critic Ben Brantley, who raved over it, “Other Desert Cities” is destined for greatness and many engagements at regional theatres across the country.  Whoa Nelly! Not so fast.

“Other Desert Cities”, listlessly directed by Robert Egan, features a nice cast in a less than stellar vehicle. There is very little energy on stage, except for the obligatory outbursts by various family members, as each character gets his or her fifteen minutes of fame in the story spotlight to propel this predictable tale of rich people suffering a personal loss.  I guess the wealthy two-percent-ers do suffer like the rest of society but they do it in a grander and more luxurious lifestyle.  Some roles are showier than others (Polly’s for one) in this story of a dysfunctional family who gather for a family Christmas celebration.  However, obviously caricatured characters, in my opinion, cannot pass a saliva test for success, let alone, greatness.  One character – Silda – could easily be dropped from the ensemble, and the story wouldn’t miss her one bit.  Sorry Ben.

The melodramatic events take place in Palm Springs in December 2004, when the family of Polly (Jo Beth Williams) and Lyman Wyeth (Robert Foxworth) gather to welcome home daughter Brooke (a finely, nuanced performance by Robin Weigert), after a six-year absence, living and writing in New York City.  Brooke’s parents are rock-ribbed Republicans (of the Barry Goldwater stripe).  Brooke is not.  Also visiting is Polly’s sister Silda (Jeannie Berlin), a “blue thorn” in the Lyman’s “red body-politic” side, who is freshly out of rehab, and quick with the political jabs and one-liners she throws at her brother-in-law and her sister.

The Wyeth’s are show biz people.  Lyman is a retired, very successful actor, who is a friend of Ronnie as he calls Reagan.  Polly and Silda were successful TV sitcom writers.  Henry Wyeth – never seen but oft mentioned – is the oldest son who was a convicted, bomb-throwing activist who committed suicide.  Trip Wyeth, is the youngest of the siblings. He’s involved in producing TV shows and doco’s.  It’s the usual mix of characters one finds in a TV series.

Although Polly is the character who gets to do most of the talking, the story revolves around Brooke.  She has been harboring smoldering resentments over her parent’s indifferent behavior over the last six years, and their role in her brother’s suicide.  As a catharsis, Brooke has written a scathing, tell-all book about the Lyman family (oh, please, not another sensational tell-all book about celebrities.  It’s been done ad nauseum, and no one really cares anyway – at least not about the people in this play).  Naturally her parents try to talk her out of publishing it.  So, okay, there’s a secret and a twist at the end that Polly and Lyman haven’t shared with the kids, but I don’t think, that once it’s revealed it can save the day for the audience.

Before I utter the phrase “Bah! Humbug!” to this holiday play let me praise the one redeeming quality the play does have – it is a visual treat for the eyes of the audience.  The absolutely gorgeous Palm Springs location-accurate set design, by Takeshi Kata and the lighting design by Lap Chi Chu, is picture perfect and spot-on.  Between acts, that was the buzz and conversation I overheard by audience members, many of whom have obviously second homes in the Palm Springs area.  That aspect of the production, did indeed, resonate with the audience.

These two gifted theatrical professionals have been very busy in Southern California theatres over the past two years. Their eclectic designs, of set and lighting have graced the stages of the Geffen Playhouse, the Kirk Douglas Theatre, and the Mark Taper Forum, among others.  The technical credits are usually first rate at The Taper.  However, certain members of the audience, the evening I attended, heard only parts of the on stage dialogue, due to microphone glitches, or by the basic on stage traffic management by director Egan.

“Other Desert Cities” performs through January 6, 2013.