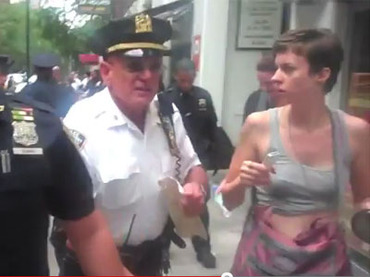 Police made 180 arrests by Monday evening, primarily for “disorderly conduct”  or impeding “vehicular or pedestrian traffic.”

Witnesses had previously  reported on Twitter that demonstrators were being arrested for“blocking pedestrian traffic.” A well known local artist named Molly Crabapple was sitting in a police van when she wrote on her Twitter page that people were being “yanked off of the sidewalk” by police.

The final tally will ultimately be higher, as at least seven people were arrested after falling on the Bank of America building later in the afternoon. Several more arrests were subsequently reported after demonstrators marched to the World Financial Center in lower Manhattan and the adjacent Goldman Sachs Tower. Around half a dozen protesters staged a sit-in protest outside of the Goldman Sachs headquarters and refused orders by police to disperse.

The protesters’ initial plan was to surround the New York Stock Exchange and hold a sit-down protest, though the heavy handed police response redirected protesters to Bowling Green Park where the iconic Charging Bull sculpture is located. Protesters later moved on to Battery Park on the southern tip of Manhattan, where activists reported up to 1,000 peaceful demonstrators had amassed. By early afternoon, union leaders and activists had already begun streaming into Zuccotti Park – the epicenter of the OWS movement – with strident police sirens marking the heavy presence of the NYPD in the area.