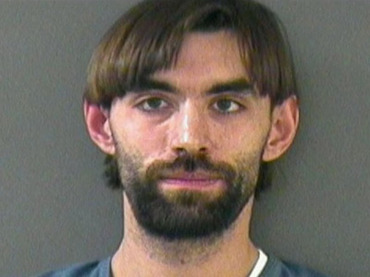 Nearly 20 years after he was convicted of shooting his own mother to death, Christian Oberender of Minnesota is back behind bars for illegally owning a small arsenal of firearms.

Authorities became reacquainted with Oberender, now 32, late last year when a complaint was filed by someone who came across his Facebook page. When authorities examined the social networking account, they found photos of just a sampling of the man’s extensive gun collection.

But upon first glance, the Carver County Sheriff’s Office didn’t see anything to spur intervention. An initial investigation found that there were no “disqualifiers” that would have prevented Oberender from owning any guns, Carver County Chief Deputy Jason Kamerud tells the Herald-Journal. When the leading law enforcement figure in the area came across the report shortly after, though, the agency started to become concerned.

Carver County Sheriff Jim Olson had reason to question the collection of guns — 17 years earlier he worked the case in which a teenage Oberender was convicted of killing his mother.

“The sheriff was one of the detectives on the case in 1995,” Kamerud tells the paper. “He had a lot more knowledge of the case than the deputies who took the call.”

According to the Minneapolis Star Tribune, a 14-year-old Oberender killed his mother with five blasts from a shotgun in 1995. Still a minor, Oberender was sentenced to an extended stay at a mental institution and was determined by officials to be mentally ill and dangerous. Just last year, however, he applied for a gun permit, had his request approved and eventually amassed a collection of over one dozen guns in under a year. The paper says Oberender had 13 guns, including semi-automatic rifles, an AK-47, shotguns and a .50-caliber Desert Eagle when police picked him up earlier this month.

Authorities also found a letter from Oberender to his late mom, believed to be written only recently, in which he writes, “I am so homicide,” and “I think about killing all the time. The monster want out. He only been out one time and someone die.”

Oberender is currently being held by police and won’t be released unless he can post a $1 million bond or $100,000 cash. Keeping the killer locked up isn’t the only thing that has authorities worried, however. Of major concern is the question: how exactly did Oberender get cleared to collect so many weapons?

Speaking to a local NBC affiliate, a spokesperson for Minnesota’s Bureau of Criminal Apprehension says they never had a record detailing Oberender’s sordid past.

“The BCA relies on entities in the criminal justice system to provide data on an individual which then populates the individual’s criminal history. There were no data submitted to the BCA about this individual – without it there can be no record,” the statement reads.

Kamerud adds to the Herald-Journal that “any purchasing of guns by him was never legal but it was possible because the disqualifiers weren’t in place.” The Star Tribune reports that the BCA couldn’t find a fingerprint card from the 1995 murder case and no case disposition was ever filed.

Oberender, who has been diagnosed with serious mental illness and “potential schizophrenia,” is being held on a charge of being a felon in possession of firearms. The Star-Tribune adds that at least 84 people in the state of Minnesota have been charged since 2000 with illegal gun possession or assault with a dangerous weapon even after being committed by a judge as mentally ill.