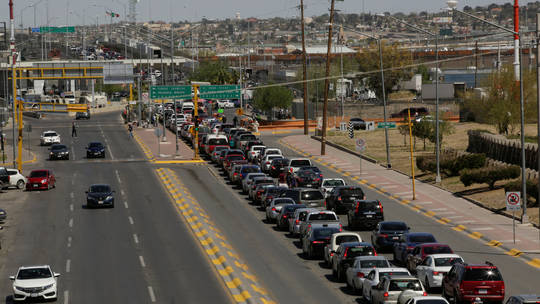 US President Donald Trump has said that there is “a very good likelihood” he will shut down the border with Mexico next week, upping the ante over border security and arguing that the US would benefit from cutting off trade.

Trump has threatened to cut trade with Mexico to zero if that’s what it takes to stop the influx of illegal migrants and drugs into the US. Speaking to reporters at Mar-a-Lago on Friday afternoon, he mounted a verbal onslaught on the Mexican authorities, accusing them of doing nothing to stop the “horrible situation” at their border with the US.

“So there’s a very good likelihood that I’ll be closing the border next week, and that’ll be just fine with me,” Trump said.

Trump claimed it would be “very easy” for Mexico to stem the flow of people sneaking into the US if they “choose to do that.”

He invoked the trade deficit the US has with Mexico to justify the reasoning behind his ultimatum, arguing that Mexico profits significantly from trade with the US and must, therefore, do its part by enforcing strict immigration laws.

Trade deficits have long been Trump’s sore spot in relations with other countries. Mexico, Canada, China, and the EU rolled out retaliatory tariffs last year after Trump imposed tariffs on steel and aluminum from most countries. Referring to the trade deficit with Mexico, Trump said cutting off trade would benefit the US economy.

“And with a deficit like we have with Mexico and have had for many years, closing the border would be a profit-making operation,” he said.

Earlier in the day, Trump tweeted that he was mulling shutting down large parts or the entirety of the border with Mexico if it does not “immediately” stop the flow of migrants. He further said the decision might impact “all trade.”