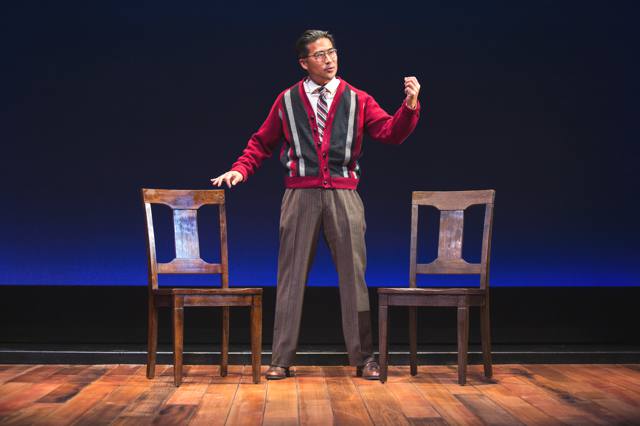 So says young Gordon Hirabayashi’s father to his eldest son whose outgoing and curious disposition is being tested by the increased discrimination in Washington state against Asian Americans, both Issei (first generation born in Japan) and Nisei (second generation born in the US); with the escalation of the war and the subsequent bombing of Pearl Harbor, the discrimination increased until it culminated in executive orders to intern all persons of Asian descent in prison camps with no regard to their constitutional rights.

Jeanne Sakata’s “Hold These Truths” is inspired by the true story of civil rights pioneer Gordon Hirabayashi. The 90-minute solo show presents Hirabayashi’s fight to reconcile his country’s betrayal while maintaining his passionate belief in the U.S. Constitution. Despite President Obama posthumously awarding a Presidential Medal of Freedom, the nation’s highest civilian honor, in 2012 to him, his story is mostly unfamiliar to many Americans.

In 1942, the University of Washington student defied the U.S. government, and his worried parents, by refusing to register and be interned in the desert with tens of thousands of fellow Japanese American citizens who were viewed as a potential threat to national security after the Japanese invasion of Pearl Harbor.

Hirabayashi, a Quaker pacifist, also rejected signing a loyalty oath and doing military service. For his acts of resistance, he served time in prison. His unrelenting efforts to reverse the unconstitutional internment of any persons of Japanese ancestry ended up with a case at the Supreme Court – where he lost in a unanimous decision upholding the government’s actions based on “military necessity.”

Paving the way to Hirabayashi’s ultimate victory, legal historian Peter Irons discovered myriad military documents, letters and memos admitting that confining Japanese Americans to camps had not been a necessary security measure: The camps, they implied, were created out of hysteria and racism. This led to the case being reheard by the Supreme Court in 1987 and this time, justice prevailed.

The timeliness and irony of the situation is not lost on the audience who chuckled and sighed at various incidents portrayed on stage that sadly echo what is happening now due to the current administration’s policies and fears of terrorist threats in the US and the world.

Actor Ryan Yu portrays Hirabayashi from his teens to middle age also playing all other parts of the protagonists and heroes of his life – including his mother and father, fraternity brothers at UW, law enforcement officials, his Quaker girlfriend and even Supreme Court Justice Patrick Murphy – and does it all seamlessly. His energy is heavily taxed during his 90-minute tour de force, but despite a slight cold, he kept the audience in thrall until the final moments.

Kudos to director Jessica Kubzansky (the original director at East/West Players) as well as the excellent technical team of scenic and lighting designing Ben Zamora who does a lot with simplicity, and sound designer John Zalewski whose subtle use of themes and natural sounds adds depth to the production.

Playwright Sakata, a successful actor herself, premiered the play in 2007 at East West Players in Los Angeles. It made its off-Broadway debut in 2012 with the Epic Theatre Ensemble, and has since been performed at numerous regional theatres including Portland Center Stage, the Guthrie Theater, Seattle’s ACT Theatre, and locally by Coachella Valley Rep in Palm Springs.

Says Sakata, “When I discovered Gordon’s story in the late 1990s, so full of heartbreak but also his irrepressible humor and zest for life…I knew I had to bring his story to the American stage.” She’s done a masterful job in showing the intimate view of one of our country’s shameful periods through the eyes of one eloquent and unrelenting man.

In a coda to his father’s early admonition, Hirabayashi shares that what he didn’t say then was the full text of the proverb which is “The nail that sticks out is the one that gets hit…Unless the nail is bigger than the hammer!” That earned well-deserved kudos from the opening night audience followed by a spontaneous standing ovation. Let’s hear it for more ‘bigly’ nails and less hammers!

“Hold These Truths” is at the Pasadena Playhouse until June 25th. Tickets can be obtained through the Box Office or online at www.pasadenaplayhouse.org.