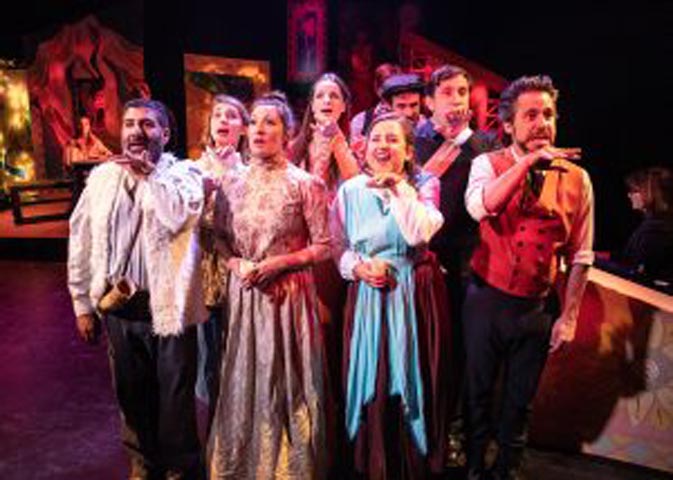 There is an old adage that “a fool and his money are soon parted.” Still, if you want to have an evening of unparalleled silliness, then I urge you to part with your money and see NEIL SIMON’S MUSICAL FOOLS, performed by the Open Fist Theatre Company at the Atwater Village Theatre.

Based on one of Neil Simon’s least popular plays, FOOLS tells the tale of the village of Kulyenchikov, which has labored under an ancient curse that dooms all inhabitants to be seriously stupid. Now while they are deliberately dense, they are not without wiles, guiles, and street smarts, and they use all of those sharp tools to stumble through their lives.

As the show opens, we meet Leon Tolchinsky (portrayed opening night by Demetris Hartman), an optimistic, bright-eyed and handsome young schoolteacher, journeying to the small village where he has been hired by Doctor Zubritsky to serve as tutor to his daughter. Once he arrives, he discovers that the IQ level of everyone he meets is in single digits. Nonetheless, he is determined to bring education, knowledge, and wisdom to the residents and professes this to his new pupil, the dim but beautiful Sophia (a lyrical, lovely Clare Snodgrass).

Imagine Fiddler on the Roof with a cast of idiots, and you’ll get a feeling for the tone of FOOLS. A large and talented ensemble brings the residents of Kulyenchikov to life, often with hilarious results. The Doctor (played opening night by Bruce Green) and his daffy wife Lenya (slyly played by Robyn Roth); the village merchant Yenchna (a scene-stealing Cat Davis) and her erstwhile suitor Mailman Mishkin (a hapless Hank Jacobs); silly shepherd Snetsky (a droll Parvesh Cheena), butcher Slovitch (Brendan Mulally), town crier and magistrate (Beth Robbins) and various villagers including Nina Genatossio, Juliane Hagn, Bolor Saruul, Diane Renee and Jack Sharp, who mine the humor for all its worth.

The show is very nearly hijacked by the presence of Jason Paige, who plays Count Gregor, the descendant of the original curse bestower, who is dogged in his pursuit of Sophia’s hand in marriage which she refuses to bestow, even though by doing so, she would end the curse. Paige’s over-the-top-in-a-good-way musical numbers are built-in scene stealers, and he makes the most of his time in the spotlight.

Overall, the talented cast does their best to make the buffoons of Kulyenchikov real and sympathetic characters. However, the book, while clever, is very pat in its observations about love, life, and wisdom; the music and lyrics were composed by Phil Swann and Ron West (who also directs the production) and sad to say there is not a memorable, hummable tune in the score. That’s a shame because there are some wonderful voices on that stage, particularly sparkling lyric soprano Snodgrass. The music director Jan Roper oversees the arrangements by Luke Harrington and leads the onstage band consisting of Adan Snow, Ross Wright, and Matt Germaine
Kudos must go to the scenic designer Jan Munroe who creates a charming pastel-themed set consisting of painted blocks that were inspired by the visual tradition of Ukrainian pysanky eggs; the program notes that at the end of the run, the pieces will be available for purchase with the proceeds going to benefit the Open Fist Theatre Company.

There is probably a reason that the original FOOLS was not a huge hit for Simon despite having a stellar cast; popular mythology says that he intended this play to fail as the profits earned would be part of his nasty divorce settlement with actress-wife Marsha Mason. But whether true or not, the show now has another chance to entice audiences to visit Kulyenchikov for the evening. Perhaps reworking some of the musical numbers would be a not-so-crazy idea to send theatergoers home humming a tune or two.

NEIL SIMON’S MUSICAL FOOLS is playing through November 17 at the Atwater Village Theatre, located at 3269 Casitas Avenue, Los Angeles 90039. On-site parking is free (although on weekend nights, street parking is available but tough to find in this small theater-heavy neighborhood), and tickets range from $15 for students up to $35 on Saturday and Sunday nights at 8 pm. For reservations and more information, call 323-882-6912 or visit www.openfist.org.