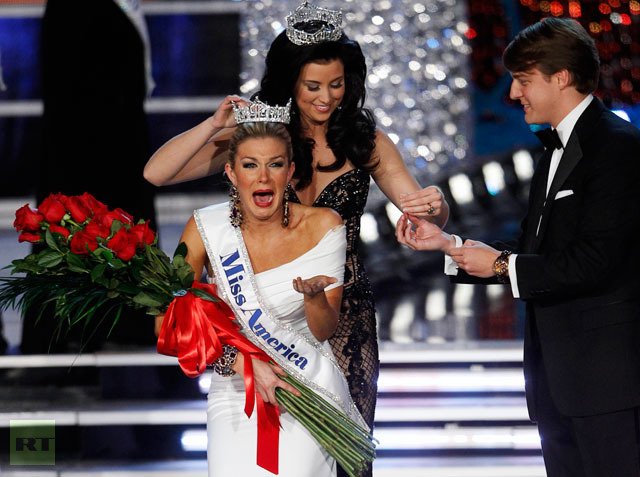 A blonde Brooklyn bombshell has won the coveted Miss America title in the far-reaching pageant in Las Vegas. The 23-year-old beauty is taking home a $50,000 college scholarship and the crown to wear for one year.

During her reign, Mallory Hagan will be challenged to help raise awareness of child sexual abuse. She said the issue is close to her heart because the women in her family themselves grappled with sexual abuse, AP reported.

She also shared her opinion about stepping up measures against violence in schools.

She is set to go on a nationwide speaking tour and raising money for the Children’s Miracle Network, the organization’s official charity.

Hagan is said to be the first Miss America from Brooklyn and the fourth from New York State. When all the contestants had to give snappy remarks about their states, Hagan chose to refer to the last year’s Superstorm, saying, “Sandy may have been swept away our shores but never our spirit.”

Hagan said she had less than $1,000 in her pocket when she moved to New York from Alabama. She lives in the Park Slope neighborhood of Brooklyn and studies communications at the Fashion Institute of Technology. She has been taking part in beauty pageants for a decade, reportedly starting as a teen in the Miss Alabama’s Outstanding Teen contest. She competed for Miss New York in 2010 and 2011 before finally winning in 2012.

The 92nd Miss America annual show featured contestants from all 50 states plus the District of Columbia, Puerto Rico and the US Virgin Islands.