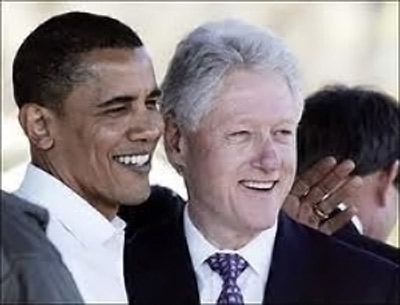 Once a tense rivalry, the relationship between President Barack Obama and Bill and Hillary Clinton has evolved into a genuine political and policy partnership. Both sides have a strong incentive in making the alliance work, especially in an election year.

For Obama, Bill Clinton is a fundraising juggernaut, a powerful reminder to voters that a Democrat ran the White House the last time the economy was thriving. For the spotlight-loving former president, stronger ties with the White House and campaign headquarters mean he gets a hand in shaping the future of the party he led for nearly a decade.

Obama’s re-election campaign has put Bill Clinton on notice that he will be used as a top surrogate, further evidence of how far the two camps have come since the bitter days of the 2008 Democratic primary between Obama and Hillary Clinton, now his secretary of state.

The current and former president teamed up to address supporters in Virginia Sunday night, the first of three joint appearances at fundraisers for Obama’s campaign. The Obama campaign expected more than 500 people at a reception at the home of Terry McAuliffe, a close adviser to both Clintons and one of the most ardent protectors of their political brand, with tickets starting at $1,000. Eighty people paid $20,000 a head for a dinner afterward.

Clinton told the crowd that Obama is “beating the clock” to restore the economy to health. Digging out of similar financial holes has historically taken five to 10 years, Clinton said.

“Barack Obama deserves to be re-elected president of the United States,” Clinton said, because he has clear objectives for the country and is meeting them.

Neither Clinton nor Obama mentioned presumed Republican presidential nominee Mitt Romney by name, but both Democrats zinged Romney for his economic plan and foreign policy credentials.

Obama said he and Hillary Clinton have “spent the past three-and-a-half years cleaning up after other folks’ messes.”

He ridiculed “the presumptive nominee on the other side” for “suddenly saying our No. 1 enemy isn’t al-Qaida, it’s Russia.”

“I didn’t make that up,” Obama said to loud laughter. “I suddenly thought maybe I didn’t check the calendar, and we’re back in 1975.”

Obama stood smiling as Bill Clinton spoke. The two men appeared relaxed and cordial. Clinton guffawed when Obama made gentle fun of him, and himself, by noting that every presidential candidate always says the next election is crucial.

Obama acknowledged that he was about to make the same argument. “Well, let me tell you,” he said to laughter and applause, “this one matters.”

Clinton’s willingness to be a good soldier for the Obama campaign could end up paying political dividends for his wife, who is frequently talked about in party circles as a potential presidential candidate in 2016 despite her repeated denials. Hillary Clinton has benefited enormously from her partnership with Obama, with her popularity skyrocketing during her time in his Cabinet.

Democrats say the overt signs of unity between the Clintons and Obama put the president at a distinct advantage over Romney. The former Massachusetts governor must soothe the wounds from his GOP primary fight and figure out whether the last Republican president, George W. Bush, will have a role in the 2012 race.

Discussions are under way at Romney’s Boston headquarters about the degree to which Bush will participate, if at all, in the general election. Many Republicans are reluctant to publicly associate with Bush, who left office deeply unpopular, especially as the Obama campaign seeks to tie Romney to Bush’s economic and foreign policy positions.

While Obama and the Clintons are rarely described as friends, people close to them say the relationship has warmed significantly since the 2008 nomination contest. In that race, the former president slammed Obama’s candidacy as a “fairy tale” while Obama sarcastically told Hillary Clinton that she was “likable enough.”

The thaw started as a matter of political necessity: Their party was desperate to retake the White House after eight years of Republican rule. Hillary Clinton offered Obama a gracious endorsement, both Clintons campaigned for Obama, and the newly elected president picked his former rival to be America’s chief diplomat.

It took longer for Obama’s relationship with Bill Clinton to soften as the two men found common ground in the pressures of the presidency.

When Obama’s health care bill was in trouble, he and his staff, which included several veterans of the Clinton White House, called on the former president for help. In late 2009 and early 2010, Bill Clinton went to Capitol Hill to rally support and worked the phones with wary Democratic lawmakers.

After the Democratic party was battered in the 2010 elections, Obama called in Clinton for an Oval Office meeting. Afterward, the two made an impromptu appearance in the White House briefing room to talk to reporters. When Obama had to leave for a holiday party, Clinton stuck around, relishing in the attention and the give-and-take with the press.

That day in the briefing room underscored what some Democrats see as their one major worry in pairing Obama with Clinton too often. The ease with which Clinton connects with a range of audiences can call attention to the challenge Obama sometimes faces in doing the same thing.

But that certainly hasn’t stopped the Obama campaign from seeking Clinton’s help in winning a second term, and Clinton has made it clear he is ready and willing.

Obama’s campaign advisers have sat down with Clinton for strategy and advice-seeking sessions, and the former president had a prominent role in movie produced by the campaign in which he promoted, among other things, Obama’s decision to order the raid that killed Osama bin Laden.