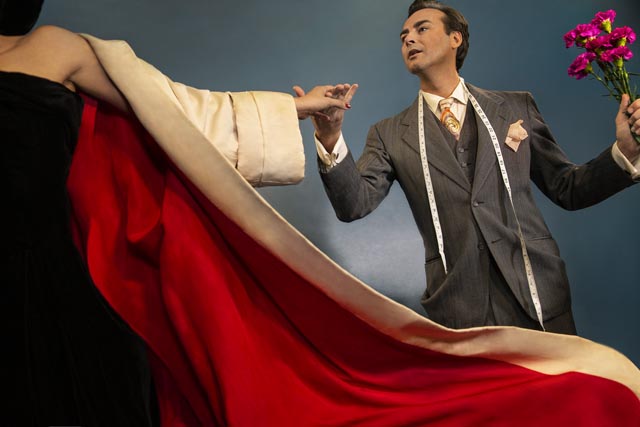 Australia’s Orry-Kelly was born in a small town in New South Wales called Kiawa, famed for its blowhole. The only child of an alcoholic tailor father and a proper British housewife, Kelly longed, for a more artistic path in life. He brought his wit, wiles and ‘wicked’ ways to America in the 1920s, first as an aspiring vaudevillian, then a Prohibition-era bootleg gin supplier, and finally ascending the Hollywood ladder as a top costume designer to the talented leading ladies of the time including Ava Gardner, Mae West, Fanny Brice (a lifelong friend) and Bette Davis, among others. Kelly was on the A list of designers, earning three Academy Awards – for An American in Paris, Les Girls and Some Like It Hot. But beneath the shimmering facade of his glamorous life, Kelly had a not-so-well-kept secret – he was a gay man with a drinking problem nursing a broken heart from a year’s long affair with debonair actor Cary Grant.

Some 51 years after his death in 1964, a handwritten memoir of his rise and fall was discovered tucked away in a pillowcase in suburban Sydney. “Women I Undressed” was never sent to a publisher. Still, when it was finally published in 2015, its sensational secrets were catnip to hungry-for-gossip movie fans.

When writer/performer Nick Hardcastle, himself an Aussie and native of New South Wales, saw a documentary about Kelly from Oscar-winning director Gillian Armstrong, he was enthralled and determined to share the story of this talented yet complicated man to the world at large. The result is “Orry,” a one-man show best described as a theatrical distillation of the memoir combining song and dance, archival footage, puppetry, and even one or two of Orry-Kelly’s original designs.

Opening with a re-imagining of Kelly’s funeral at Forest Lawn, complete with eulogy by Jack Warner, we meet the impish title character who leaps from his all-white coffin to address the audience and introduces us to his early life – including his invisible friend “Bijou” and his lonely life as somewhat “different” from his working-class schoolmates.

Hardcastle is a handsome and ingratiating performer who quickly makes the audience fall for this Down Under devil. His singing voice, while not powerful, is elegant and well-suited to the demands of the role. The Soubrette, played by lovely lyric soprano Danielle Heaton portrays Bijou, Fanny Brice, and a variety of other colorful characters from Kelly’s life and does so with effortless charm.

Musical director Anthony Zediker accompanies Hardcastle as he weaves popular songs of the era throughout the performance as a commentary on the action. Lighting by Jared A. Sayeg is subtle, and the costumes by Kate Bergh are spot on. Director and dramaturg Wayne Harrison (the former artistic director of Sydney Theatre Company) keeps it simple, playing most scenes front and center, letting his leading man control the pacing of the approximately 100-minute one-act with great success.

We don’t discover much about Kelly’s life in the 50s and 60s – Kelly apparently was discreet and never mentioned names of his lovers other than Grant and a rascally con man in Sydney known as “Gentleman George” – but the amazing designs and artwork he produced spoke volumes about his view of life and the legacy he left behind which comprised an astonishing 300 films between 1932 and 1963.

For a titillating and swellegant evening, I encourage you to visit the Lee Strasberg Theatre, located at 7936 Santa Monica Boulevard in West Hollywood. ORRY is playing for a limited run closing November 11, so get your tickets soon by calling 855-326-9945 or visiting Gentleman-George.com.