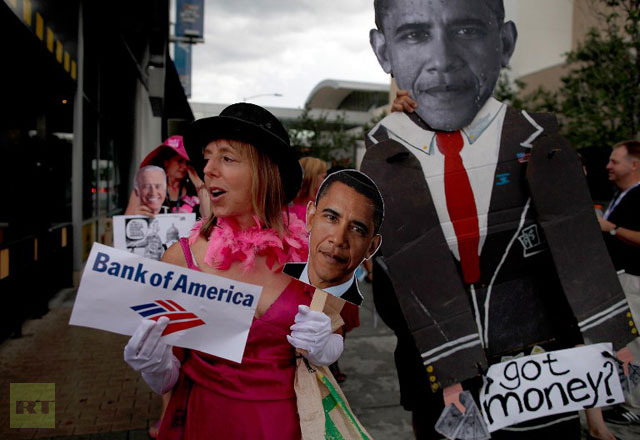 Hundreds of people have taken part in the March on Wall Street South event in Charlotte, carrying banners, banging drums and chanting slogans against corporate greed. The protest ahead of the Democratic National Convention proceeded peacefully.

The turnout at the event was lower than organizers had expected, with only about 1,000 activists from dozens of groups marching through the city center on Sunday.

Small groups of protesters made stops along their way to stage sit-ins in front of Bank of America headquarters and power utility Duke Energy.

The march drew people protesting against a variety of causes in addition to corporate collusion with the US government. Along with slogans like “Capitalism is holding back the human race,” and “Bail out people, not banks,”  protesters were bearing signs saying “No war on Iran” and “Obama murders children with drones.”

About 100 police officers walked alongside the protesters, with a helicopter hovering above the crowd. They carried wooden batons, plastic hand ties and gas masks, but did not use them as the event went smoothly.

Only one person was arrested during the march, for intoxication, police said.

The parade route and “free speech” areas were designated by the authorities well in advance. The city also assigned time slots for speaking and marches.