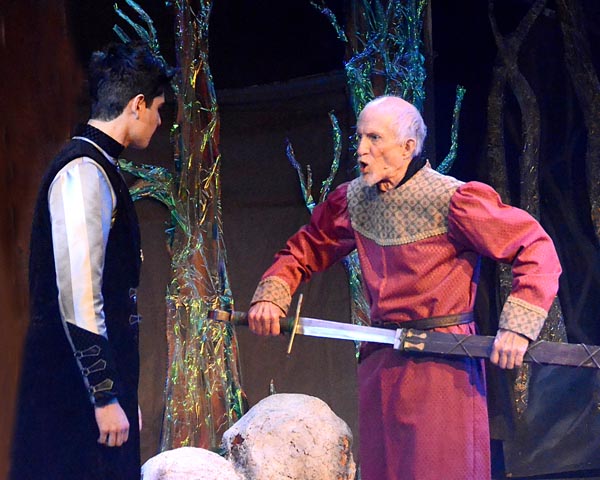 Although our society and culture is always evolving when it comes to our entertainment choices – theatre, movies, TV streaming platforms, and music – thankfully, there are always the golden oldies that audiences of a certain age cling to and with good reason. They’re familiar; they’re warm, cozy, and deliver music and lyrics to which that age group can understand and relate.

The Palm Canyon Theatre of Palm Springs (PCT), now in its 23rd season of presenting quality entertainment, is producing a revival of Alan Jay Lerner and Frederick Lowe’s romantic fairy tale of King Arthur and the Knights of the Roundtable, based on the T.H. White book “The Once and Future King,” better known as the musical “Camelot.”

Alan Jay Lerner, and Frederick Lowe, are among Broadway’s music royalty, ranking alongside Rodgers and Hart, then Rodgers and Hammerstein, Cole Porter, Leonard Bernstein, and Stephen Sondheim; among others.  The Broadway theatre was built on the talents of these giants.  The newer playwrights like Lin Manuel Miranda of breakthrough fame for “In the Heights” and nine years later, the Blockbuster runaway smash hit “Hamilton” is the subject of another review.

In case one has been living in a cave for the past 60 years, “Camelot” the musical has some of the most iconic music and lyrics found in the American Song Book.  The haunting “If Ever I Would Leave You,” to the clever, wishful thinking, lyrics of the title song “Camelot,” to the poignant “I Loved You Once in Silence,” to the tender “How to Handle a Woman,” have resonated with audiences for six decades.

The Palm Canyon stage production of “Camelot,” is once again awash in the breathtaking colors and costumes created by play director/choreographer Derik Shopinski.  The set by resident design wizard J.W.Layne cleverly reduces the sprawling story to fit neatly within the PCT proscenium walls and stage space. Sound by Brenna Williams and Props by Toby Griffin round out the creative technical team under the direction of Derik Shopinski.

Opening Night can often produce opening night jitters among cast members.  Especially when the production had to share the theatre and performing space with the Palm Springs International Film Festival that uses the PCT venue as a festival screening site, which then shortened the musical’s normal rehearsal time to just thirteen rehearsals.

Sixteen performers bring the production to life for its appreciative audience. The cast presents a broad range of experience and credits to this “Camelot.”  Having said that, the strength of the musical lies in its leading actors:  Garnett Smith, as King Pellinore, brings a wealth of professional credits to his role of the delightful but somewhat dotage-driven behavior by elderly King Pellinore, advisor to King Arthur.  It’s the type of role that has “scene-stealer” written all over it.  Solid support also comes from Nikki Hock as Nimue/Morgan Le Fay and Noah Arce as Mordred.

A little gem of a performance near the final scene is courtesy of Fabrizio Ibanez as young Tom of Warwick.  It’s a tiny, but important, poignant moment that young Ibanez shares in a scene with Mr. Grant’s King Arthur. It’s delivered with just the right amount enthusiasm and understanding for one so young.  TV and the stage may be in his future if he gets bitten by the acting bug.

Jordan J. Jones as Sir Lancelot, (originally a role made famous by Robert Gullet), is a singer who acts and gets to fall in love (lucky fellow) with the fairest maiden in the land of Camelot, Queen Guenevere, the beautiful wife of King Arthur Pendragon who is played by Se Layne.

The last time I saw Ms. Layne, on stage, she was tutoring the children of the King of Siam in the musical production “The King and I” at PCT.  I stated then that the role of Anna was a role she was born to play. I may have misspoken myself.  The beautiful Ms. Layne is on a roll with back to back winning performances.  She easily slips from young maiden into a coquettishly young adult, to a desirable Queen.  It’s another finely judged performance from Ms. Layne, who stars in a role that features her classically trained voice once again (lucky audience).

Paul Grant, as King Arthur, brings his extensive credits in New York, along with his many national touring company roles, to the Palm Canyon stage once more.  His energy and on-stage chemistry with his co-star Ms. Layne underscores the standards that these two professional performing actor/singers bring to their roles of King Arthur and Queen Guenevere.

The musical production, once again, is under the musical direction of Steven Smith, on piano with accompaniment by David Bronson on drums and Larry Holloway on string Bass.

“Camelot” performs on the Palm Canyon Theatre stage and runs through February 9, 2020.  For reservations and ticket information, call the box office at 760-323-5123.