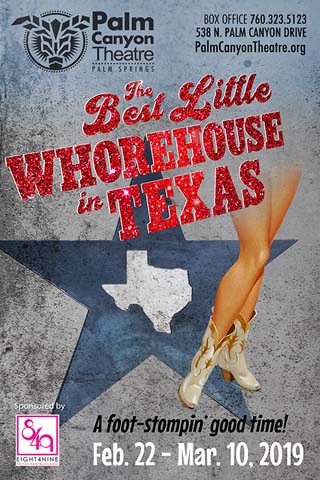 When one is in Palm Springs, and one is a theatergoer who loves musicals, the Palm Canyon Theatre (PCT) is one of the venues you should check out.  The Layne family now in their 21st year of presenting theatrical productions both musicals, as well as comedies and dramas, is currently presenting the musical “The Best Little Whorehouse in Texas.”
It’s a colorful high energy, boot-stomping, hoot of a production that features dancers, singers, and sparkling costumes that light up the stage, courtesy of resident costume designer-extraordinaire Derik Shopinski. The “Whorehouse” story is a bit dated these days having debuted on Broadway 41 years ago, but subsequent revival productions have judiciously cleaned-up the bawdiness and the objections to the lyrics and titillating dialogue to a point where one doesn’t see references to it as being “Banned in Boston” or “ the work of the Devil” anymore.

Based on the true story about the state of Texas’ famous “Chicken Ranch” brothel, Writer Larry L. King wrote the libretto with Peter Masterson, with music and lyrics supplied by Carol Hall.  The production is directed by Se Layne and features 33 actor, singer, dancers, plus a four-piece orchestra under the baton of Musical Director and pianist Steven Smith; includes David Bronson on Drums, Larry Holloway on Bass, and John Pagels on guitar.

Thirty-three performers on the PCT stage could be a recipe for classic grid-lock both on and off the stage. However, Director Layne nicely avoids those pitfalls and keeps the action going.  The choreography wisely created by Anthony Nannini is both energetic and audience-pleasing without straining the dancing skills of performers who have reached ‘a certain age.’

There is no way I can list a cast of thirty-three performers due to a lack of space.  However, there are always standouts who are: Jaci Davis as Miss Mona Stangley.  Ms. Davis is an experienced leading lady who knows her way around a musical stage who also knocked the socks of PCT audiences in last year’s production of “Gypsy,” starring as Mama Rose.

In the technical department led by Director Layne, the excellent set design by Neil Kapple allows for plenty of space for the huge cast to perform without bumping into one another. The lighting is designed by the redoubtable JW Layne, resident set designer and theatre company co-artistic director.

“The Best Little Whorehouse in Texas” performs at the Palm Canyon Theatre through March 10, 2019. For reservation and ticket information call the Box Office at 760-323-5123.