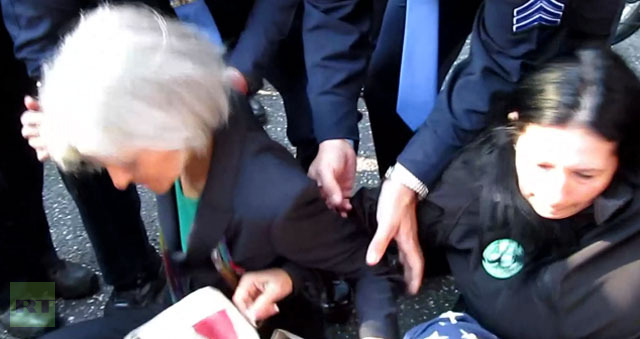 The two were protesting against the exclusion of all but the two major political parties from taking part in the debate.

The presidential candidate and her vice-presidential nominee were arrested by local police when they tried to enter the grounds of Hofstra University, in Hempstead, New York, Stein’s campaign website says. The women were later released from police custody.

A video posted on YouTube shows police officers ushering Stein and Honkala away after they apparently tried to stage a sit-in.

The arrest comes after an announcement by the Green Party that the candidates will take “Occupy the Commission on Presidential Debates” action on the night of the debate.

“Stein and Honkala will walk from Nassau Veterans Memorial Coliseum at 2 PM to the debate perimeter at Hofstra, where they will then attempt to walk through security checkpoints and reach the debate hall,”

“This is a great day for democracy,”

tein told The Philadelphia Weekly by phone as she headed to the debate site.

“It’s a great day for the politics of courage.”

The candidates claim that the Commission on Presidential Debates is an unfair entity formed by Democratic and Republican leaders designed to exclude any opposition.

Jill Stein is the Green Party’s nominee for President of the United States in the 2012 election. A Harvard-educated physician, she also stood for election for Governor of Massachusetts in both 2002 and 2010. A staple of her campaign is the “Green New Deal,” a plan to recharge the US by giving “every American willing and able to work” a job on renewable energy projects in the country. She is backed by American leftist icon Noam Chomsky and acclaimed journalist and harsh critic of unregulated capitalism Chris Hedges.