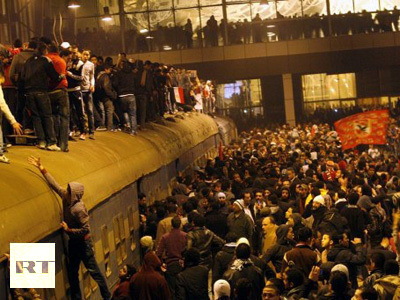 New clashes have broken out in Egypt over Wednesday’s football riot and stampede in Port Said in which 79 died. Two further deaths occurred on Thursday after police opened fire on an angry crowd which tried to storm a police station.

A 3,000-strong mob, furious at the failure of security forces to prevent Wednesday’s tragedy, attacked policemen in the Mediterranean city of Suez.

Meanwhile in Cairo on Thursday a massive row outside the city’s Interior Ministry headquarters ended with over 400 people injured. Witnesses reported ambulances rushing to the area and unconscious people being carried from the scene. Violence flared when some 10,000 angry protesters pushed their way through barbed wire barriers to the building near Tahrir Square.
Protesters blame the country’s security forces for failing to prevent a series of brawls that killed dozens and left hundreds more injured after a football match on Wednesday.