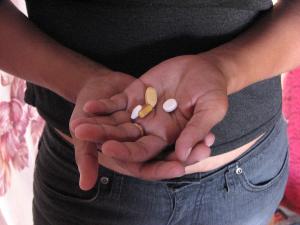 One of the big mysteries of AIDS is why some HIV-positive people take more than a decade to progress to full-blown AIDS, if they progress at all.

Although the average time between HIV infection and AIDS in the absence of antiretroviral treatment is about 10 years, some individuals succumb within two years, while so-called slow progressors can stay healthy for 20 years or longer.

Researchers already know that many slow progressors carry a gene called HLA-B*57 (B57), an immune gene variant that is found in less than 5 percent of the general population but in 40 to 85 percent of slow progressors. Yet even among those with the B57 gene, the speed of disease progression can vary considerably.

Now, a group of investigators from the Multi-Center AIDS Cohort Study (MACS), housed within the UCLA AIDS Institute, may have uncovered the key to this variation. It is a killer T-cell immune response that occurs early on in HIV infection and targets a section — or epitope — of the HIV protein called IW9.

The novel findings are featured on the cover of the October issue of the Journal of Virology.

“Since the hope for a vaccine is that it would elicit immune control, the thought has been that understanding how B57 protection works would yield helpful lessons and principles for vaccine design,” said Catherine Brennan, an assistant research scientist in the department of medicine at the David Geffen School of Medicine at UCLA and the study’s lead author. “There have been a lot of efforts to understand how the immune response to HIV in B57 carriers is superior to the response in non-B57 carriers, but it has been hard to nail anything down conclusively.”

Previous research had largely focused on the killer T-cell response after several years of infection. However, Beth D. Jamieson, a professor of medicine at the Geffen School of Medicine and the study’s principal investigator, believes that the most critical responses are likely to occur early during infection, when the T cells are still strong and can reduce the number of places where HIV hides out in the human body.

Researchers have studied the immune response in the early months of infection, but since it is not easy to predict at early stages which people will ultimately become slow progressors, correlating early immune responses with long-term outcomes has been difficult.

“What made this kind of study possible for us is the Multicenter AIDS Cohort Study, which is an incredible longitudinal study,” Brennan said.

The MACS has been freezing blood samples every six months since 1984 from thousands of men either at risk of HIV infection or already infected.

“The size and duration of the study, along with the careful documentation of participant health and stewardship of frozen samples, allowed us to recover blood samples taken shortly after HIV infection from 14 HLA-B57 carriers with known infection dates and known long-term outcomes,” Brennan said. “This allowed us to correlate early immune responses with long-term outcomes.”

It was important to the researchers to compare only the killer T-cell responses among those with the B57 gene variant, instead of comparing the responses of those with and without B57. Although B57 carriers have, on average, much better prognoses than non-carriers, there is tremendous variability among the population, and not all do well, Jamieson said.

“Since possession of the B57 variant is not sufficient, we wanted to determine what specific immune events in B57 carriers are associated with immune control of the virus,” she said. “We found that those who targeted the IW9 epitope early in infection had significantly longer times until onset of AIDS than those who did not. The finding that targeting of IW9 seems to be important is novel, as this epitope had been overlooked in many earlier studies of B57 and HIV.”

The researchers cautioned that the study was based on a small sample of only 14 individuals and that a wider pool of subjects is needed to replicate their findings. Also, their results point to a correlation with — not causation of — slower disease progression among B57 carriers who target the IW9 epitope soon after HIV infection.

“This work, although not powered by a large cohort and necessarily exploratory in nature, does suggest that the role of IW9 targeting in B57-mediated protection merits closer attention,” the researchers conclude. “Understanding the detailed mechanisms by which B57 is associated with slow progression to disease will reveal underlying principles of immune control of HIV-1, which is critical for the development of rational vaccine-design strategies.”

The UCLA AIDS Institute, established in 1992, is a multidisciplinary think tank drawing on the skills of top-flight researchers in the worldwide fight against HIV and AIDS, the first cases of which were reported in 1981 by UCLA physicians. Institute members include researchers in virology and immunology, genetics, cancer, neurology, ophthalmology, epidemiology, social sciences, public health, nursing and disease prevention. Their findings have led to advances in treating HIV, as well as other diseases, such as hepatitis B and C, influenza and cancer.