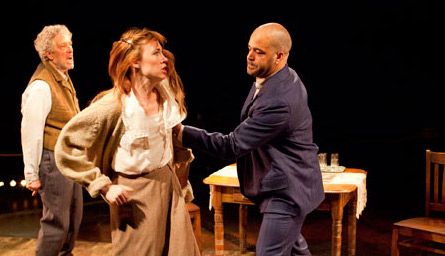 “Anna Christie”, by playwright Eugene O’Neill, America’s first Nobel Laureate in Literature, is a powerful drama of alienation and redemption.  It’s a story that abounds in metaphors concerning a former prostitute who falls in love, but runs into problems and difficulty when it comes time to turn her life around.   Sounds pretty tame and prosaic stuff by today’s standards however, in 1921 when the play opened at the Vanderbilt Theatre on Broadway, it set some tongues wagging for its frank and earthy approach concerning prostitution by the play’s characters.  It also won a Pulitzer Prize and a NYC Drama Desk award, clearly announcing that Eugene O’Neill was well on his way to becoming America’s premiere playwright.

“Anna Christie” isn’t done all that often.  There have been only three or four  mountings in major American cities since its premiere.  In the Old Globe’s production, winningly and seamlessly directed by Daniel Goldstein (a hot young director on Broadway just now with his revival production of “Godspell”), the story set in 1910, resonates with the audience through three characters:  Chris Christopherson (Bill Buell), Captain of the coal barge ‘Simeon Winthrop’, Mat Burke (Austin Durant), a young, bellicose Irish stoker who works the steamer ships, and Anna Christopherson (Jessica Love), the estranged daughter of “Old Chris” who seeks, not only true love, but purification.

Anna’s mother died when she was five.  The life of a sailor is a lonely one with long stretches of time between sea and home, resulting in Chris’ decision to send her to live with relatives on a farm in Minnesota, a thousand miles from any ocean.  Old Chris has been at sea for the past fifteen years, and has lost all touch with his daughter.  One day a letter arrives announcing that Anna is coming to visit him.  He is better known in the bars and saloons of seaports around the world, than he is to his daughter.

Bill Buell brings a tough, but weary, seafaring quality to his Chris.  He is blustery, but his inner core is softer than he wants to let on.  Alienation is a powerful motivator and now Chris wants to reconnect with his daughter as a way of making up for his years of being an absent non-parent.  But, his journey won’t be easy. It’s full of obstacles. Buell’s performance is finely judged and his Swedish accent has the ring of authenticity to it.

Buell, as Chris, understands the power that the sea holds over him.  He both respects and fears it, but it’s all he knows… it’s the life of a sailor.

As Anna, Jessica Love shows us what years of living without parents and the love of family can do to a young woman who has to do what she can to survive and make her way in a very callous world.  Men are her enemy.  Inwardly she screams at just the thought of men and her relationships with them.  Now she is coming to visit and perhaps, stay with her father on his barge.  He has no idea of her past; a past she would love to leave behind.  Anna is now ready for a clean fresh beginning.  She is just not sure what form it will take.

Into this charged atmosphere comes Mat Burke, a young, strong, Irishman who makes his living as a stoker on steamships.  Rescued during a storm by Chris and his crew, Mat, played with such intensity by Austin Durant (a world-class perspiration-producing machine if I ever saw one), is full of Celtic charm beneath his tough exterior.  Durant has the poetry and the language lilt down pat.  When he delivers the dialogue and his feelings to Anna with such ease and passion, it’s easy to see why she falls for him.  It’s love at first sight for both of them.   But, ay, here’s the rub.  Chris doesn’t want his Anna married to a sailor.  At one point, he says, “Any girl that marries a sailor, is a fool”.

Water is the appropriate metaphor for the play.  O’Neill worked on tramp steamers in his youth and he has a semi-autobiographical “roman a clef” attachment to the character of Mat.  Chris knows the mythic quality water has for sailors, and Anna seeks the cleansing power of the sea, as a way toward a new life.

“Anna Christie” features a wonderful supporting cast.  Kristine Nielsen as Marthy Owen, and Brent Langdon as Larry the bartender, nicely play and portray denizens of the seaport and harbor towns familiar to audiences the world over.  Rounding out the cast  are John Garcia (what a great character face for the movies) as Johnny-the-priest, Jason Maddy as the Postman, Chance Dean as Johnson and a longshoreman, along  Bryan Banville as a Longshoreman.

A great deal of the success and look of this winning production goes to the creative team.  Scenic Designer Wilson Chin, has taken the arena stage of the White Theatre, and cleverly transformed it into a saloon, a ships exterior, and a couple of ship interior scenes all without challenging the acceptance of the audience.  Especially effective are the fog scenes.  They place the audience right onboard the boat along with the actors.

The mood lighting by designer Austin R. Smith, for both the exterior and interior scenes lends a verisimilitude to the overall production.  Paul Peterson’s sound design effectively supplies the sounds of the sea (although I think the sound-level needs to come down several notches for audiences in the comfortably intimate 250-seat White stage). The costume designs by Denitsa Bliznakova perfectly match the era and the action.  I especially liked the touch of the sweat-stained vest worn by Chris.

“Anna Christie” is a first-rate production and is one of the plays selected in the Old Globe’s  “classics up close” program. Don’t Miss It!  The show runs through April 15, 2012.  For information call 619-231-5623 or online to www.theoldglobe.org .