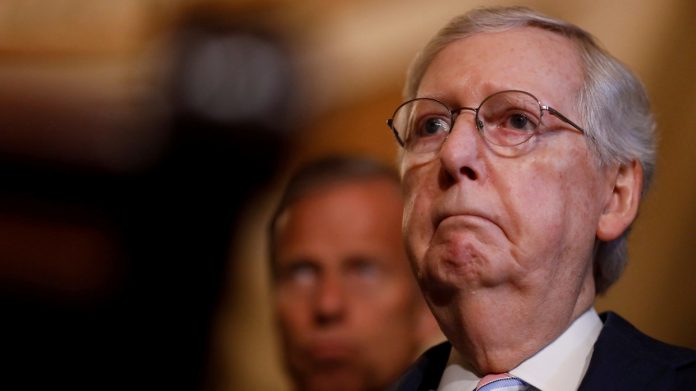 A group of about 30 protesters showed up at the 77-year-old’s home at 9pm Monday night and made noise by ringing cowbells and scraping shovels along the pavement for more than two hours. In a live video, broadcast via Facebook, a protester can be heard saying “just stab the motherf**er in the heart, please.”

“We’re out here because he wants thoughts and prayers, when another white man massacres people,” the protester added.

They said the “emergency protest” was a bid to gain McConnell’s attention and voice their concerns over gun control because he was not returning calls made to his office. The senator has been staying at his Louisville home over the summer break as he recovers from a broken shoulder after a fall.

In the footage shared online one person can be heard yelling, “come out, come out, wherever you are,” while someone else says: “The bitch [sic] home, we keep seeing the lights go on and off.”

“This hoe really thought he was going to get ready to be at home after he hurt his little punk ass shoulder. Bitch don’t nobody give a f**k! F**k your thoughts and prayers, Mitch. F**k you, f**k your wife, f**k everything you stand for.”

Louisville Metro Police were on the scene to monitor the demonstration while a group of men stood outside the senator’s home to keep protesters at bay.

McConnell has become a target of the increasingly hostile national debate over gun control, following the mass shootings in El Paso and Dayton, after he failed to call a senate vote on a gun reform bill that was passed by Democrats back in February.