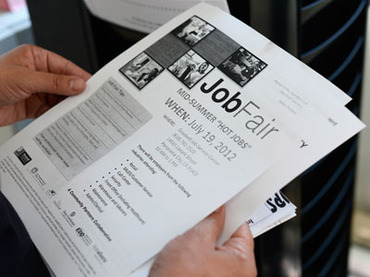 The US Bureau of Labor Statistics takes these other factors into consideration for data it calls the “U-6” – and these numbers are shockingly higher.

U-6 data includes “discouraged workers,” which the Bureau defines as people not in the labor force, but want and are available for work and had looked for a job in the prior year.

Those who have not looked for work in the prior month are not included in the U-3 unemployment rate.

The national U-6 rate is 15.3 percent, but some states have a shockingly higher individual rate.

Nevada’s U-6 unemployment rate is 22.1 percent – the highest in the country. The rate is almost three times higher than what it was in 2007, at 7.6 percent.

California has a rate of 20.3 percent, while Rode Island lies at 18.3 percent.

But even though July nonfarm payrolls rose more than forecast by 163,000 and the average hourly earnings increased by 2 cents, unemployment did not decrease.

“The economy is growing but not at a satisfactory rate to bring down unemployment,” Stephen Stanley, chief economist of Pierpont Securities, told Reuters.

“The lack of improvement in state U-6 rates continues to be troubling,” said Chris Maura, head of US Municipals Strategy at RBC. “While down from recent peaks, state U-6 levels remain dramatically higher than they were in 2007 and 2008.”

And while July far surpassed June’s payroll growth of 64,000, the unemployment rate continues to remain unaffected.

“Job growth is not enough to make a big dent in the unemployment rate,” said Joshua Shapiro, chief US economist at Maria Fiorini Ramirez Inc. “It is unrealistic to expect strong gains in consumer spending.”

The U-6 rates are always higher than the official U-3 unemployment rates, and at a time when both numbers are high and confidence is low, it is less alarming for Americans to look mainly at the lower one.