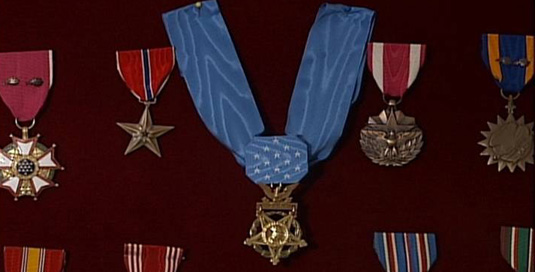 You might remember a news story several months ago about a crotchety old man who defied his homeowners association and refused to take down the flagpole on his property and the large flag that flew on it. Now you can find out who, exactly, that old man was.

Twenty-five years later, on May 23, 1944, near Carano , Italy, Van T. Barfoot, who had enlisted in the US Army in 1940, set out to flank German machine gun positions from which fire was coming down on his fellow soldiers. He advanced through a minefield, took out three enemy machine gun positions and returned with 17 prisoners of war.

If that wasn’t enough for a day’s work, he later took on and destroyed three German tanks sent to retake the machine gun positions.

That probably didn’t make much news either, given the scope of the war, but it did earn Van T. Barfoot, who retired as a colonel after also serving in Korea and Vietnam , a Congressional Medal of Honor.

What did make news was a neighborhood association’s quibble with how the 90-year-old veteran chose to fly the American flag outside his suburban Virginia home. Seems the rules said a flag could be flown on a house-mounted bracket, but, for decorum, items such as Barfoot’s 21-foot flagpole were unsuitable.

He had been denied a permit for the pole, erected it anyway and was facing court action if he didn’t take it down. Since the story made national TV, the neighborhood association has rethought its position and agreed to indulge this old hero who dwells among them.

“In the time I have left I plan to continue to fly the American flag without interference,” Barfoot told The Associated Press. As well he should. And if any of his neighbors still takes a notion to contest him, they might want to read his Medal of Honor citation. It indicates he’s not real good at backing down.

A Real Hero Has Died….